-akatsuki- (-暁-, -akatsuki-) was one of the Face stables, in the Dragon Gate promotion. It was formed in April 19, 2012 and the stable disbanded in August 1, 2013. During its run, the group consisted of Shingo Takagi, YAMATO, Cyber Kong, Chihiro Tominaga and Super Shenlong. On August 1, 2013 -akatsuki- was forced to disband, after losing to Mad Blankey in a five-on-four tag team match.

After the disbanding of Junction Three, Shingo Takagi and YAMATO decided not to align themselves with any of the units that were formed. The duo were certainly fighting various battles against groups with greater numbers, but were oftentimes able to score victories every now and then. At the same time, Chihiro Tominaga had finally graduated to the main roster after nearly six years as a trainee. Though he was offered membership in WORLD-1 INTERNATIONAL, he declined and instead appealed to Shingo and YAMATO to team with them.

Shingo and YAMATO were not interested in forming a unit at first, but did allow Tominaga to second them on occasion. Overtime, they started to watch his back during his feud with Mondai Ryu. Ultimately, they helped him weather the storm of MAD BLANKEY attacks to help Tominaga defeat Mondai Ryu in a match where Tominaga's hair and Mondai Ryu's entrance theme were on the line. Following the match, Shingo and YAMATO decided to form a unit with Tominaga and introduced a new Super Shenlong, who would be better suited with the entrance theme Tominaga had won. The name Akatsuki roughly translate as rebirth. The concept of the unit was to be seen as a revitalization for the members. For Shingo and YAMATO, it would recharge their careers which had been teetering on being stagnant. For Tominaga, it would potentially kick start a promising career after so many years training. For the new Super Shenlong, it was to hopefully give the name new life and purpose. However, despite a decent start, the group was not seen as a major force. While Shingo and YAMATO managed to win the Open the Twin Gate Championship twice,[1][2] neither Tominaga or Shenlong progressed any further in rank with Tominaga losing steam after a hot start and Shenlong just not being considered a strong competitor. The lack of movement caused YAMATO some discomfort as the months went on, though Shingo was able to calm him enough that they were able to remain on the same page. But in the end, YAMATO had enough. During a defense of Twin Gate Championship on June 15, 2013 against Akira Tozawa and BxB Hulk, YAMATO accepted a chair from Hulk and smashed it over Shingo's head. He followed with a Gallaria and allowed Hulk to hit Shingo with the First Flash for the win. YAMATO betrayed Shingo, claiming to have carried him the last few years with unlimited chances, but now he was free and joined up with MAD BLANKEY.[3]

While the betrayal derailed Akatsuki, Shingo continued to display a strong will by ending CIMA's year-and-a-half reign as Open the Dream Gate Champion.[4] Though this would be seen as the start of a new beginning, YAMATO quickly stepped in and challenged for the title. Furthermore, he continued to bury his former team at every which way possible.

The two groups agreed to a Losing Unit Disband match with the added bonus of the one to lose the fall to be stripped of either their mask or hair. With MAD BLANKEY have greater numbers, Shingo accepted Cyber Kong's invitation to join Akatsuki, seen as a means of returning to the strength he once held.

On August 1, -akatsuki- was forced to disband, after losing to MAD BLANKEY in a five-on-four tag team match.[5] Also part of the stipulation, Super Shenlong was forced to unmask revealing his true identity and it was Yosuke Watanbe.

Since the disbanding of Akatsuki, both Tominaga and Watanabe continue to wrestle on the undercard. They are pressured even more to improve by the arrival of the Millennials unit, their peers who undertook learning excursions in North America and returned stronger than ever. As Akatsuki disbanded, YAMATO lead a coup to kick Tozawa out of MAD BLANKEY. Tozawa slowly started to form a partnership with Shingo, which did not sit well with Kong. After Uhaa Nation was kicked out of MAD BLANKEY for refusing to attack Tozawa, Kong rejoined the group and took his place at unit strong man. Shingo and Tozawa quickly sided with Uhaa and the three plan to form their own unit shortly.Tominaga would later join MAD BLANKEY and Watanabe would also join Millennials and remaning his name to Yosuke♥Santa Maria. 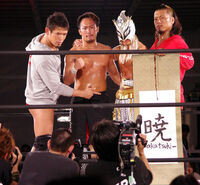 The Original Members of -akatsuki- 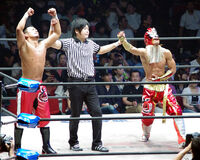 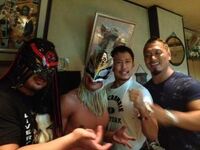 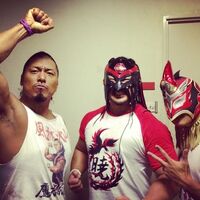 Kong, Shingo and Shelong
Add a photo to this gallery 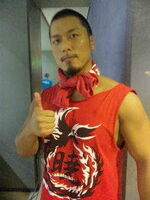 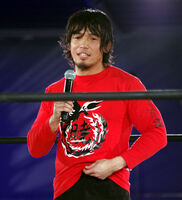 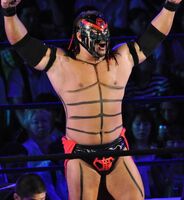 Chihiro Tominaga
Add a photo to this gallery 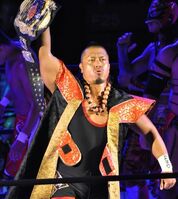 Retrieved from "https://puroresusystem.fandom.com/wiki/-akatsuki-?oldid=18506"
Community content is available under CC-BY-SA unless otherwise noted.