The (All) Asia Heavyweight Championship is a title contested in the Land's End Pro Wrestling promotion. The title was originally created and defended in Japan Wrestling Association (JWA) promotion.[1] When JWA shut down in 1973, the title went inactive until being reactivated in All Japan Pro Wrestling (AJPW) in 1976 after New Japan Pro-Wrestling (NJPW) announced the creation of its own version of the title.[2] The NJPW title was retired in 1981, while the AJPW title was retired in 1995, following the retirement of final champion Kintaro Ohki.[2]

The championship was unveiled in November 1955 by Japan Wrestling Association during the JWA Championships tour. The title was created alongside the All Asia Tag Team Championship. On November 22, 1955 Rikidozan defeated King Kong in a tournament final to become the first champion. The title was later vacated after Rikidozan's death. Then a tournament was held in Seoul, South Korea to crown a new champion, which was won by South Korean wrestler Kintaro Ohki who defeated Buddy Austin to be crowned the new champion. Ohki made 23 successful title defenses until losing the championship to Canadian wrestler Bill Dromo.

On December 15, 2017, the Land's End Pro Wrestling promotion announced that it had gotten the blessing of PWF chairman Dory Funk Jr. and Mitsuo Momota, the son of inaugural champion Rikidozan, to revive the Asia Heavyweight Championship with a tournament to crown the new champion set to take place in South Korea on January 21, 2018.[3] This also led to a new design of the championship. The tournament was won by Ryoji Sai who defeated The Bodyguard in the finals of an eight-man tournament. 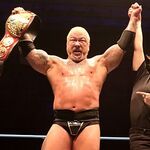 The Bodyguard
Community content is available under CC-BY-SA unless otherwise noted.