On March 26, 2012, Yoshihito Sasaki defeated Daisuke Sekimoto in the finals to win the 2012 Ikkitosen Strong Climb tournament. Following his win, Sasaki requested that BJW establish a new championship that would symbolize the "strong" side of the promotion. BJW already had one heavyweight championship, the BJW Deathmatch Heavyweight Championship, but it was contested exclusively in deathmatches. This led to BJW announcing the creation of the BJW World Strong Heavyweight Championship on April 14, 2012. On May 5, Yoshihito Sasaki defeated Westside Xtreme Wrestling (wXw) representative and the reigning wXw Unified World Wrestling Champion Big van Walter in a decision match to become the inaugural champion. Sasaki held the title for the rest of the year, successfully defending it four times. On January 2, 2013, All Japan Pro Wrestling (AJPW) representative Manabu Soya defeated Sasaki in his fifth title defense to become the second BJW World Strong Heavyweight Champion. Soya's reign lasted only two months, before he lost the title to Daisuke Sekimoto on March 1, 2013. Sekimoto held the title for the rest of the year, breaking Sasaki's records for the longest reign and most successful title defenses, with ten.

On December 29, 2013, Sekimoto suffered a knee injury, but made his return to the ring just two weeks later. However, on January 18, 2014, Sekimoto held a press conference to announce that his quick return had led to a meniscus tear in his knee, which would require surgery, sidelining him for an estimated six weeks and forcing him to relinquish the BJW World Strong Heavyweight Championship. BJW announced that a new champion would be determined between Shinya Ishikawa and Yuji Okabayashi on February 7, 2014. Okabayashi was later sidelined with a shoulder injury and replaced in the match by Ryuichi Kawakami. On February 7, Ishikawa defeated Kawakami to become the fourth BJW World Strong Heavyweight Champion. During his reign on September 17, 2014, BJW surprisingly announced that Ishikawa was going to retire from professional wrestling on September 23. Though Ishikawa's retirement ceremony was later canceled, the BJW World Strong Heavyweight Championship was declared vacant. 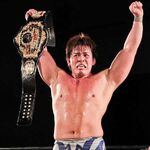