Blood WARRIORS (ブラッド・ウォリアーズ, Buraddo uoriāzu) ("Warriors" stylized in all capitals) or BW for short, was the top heel stable in the Japanese professional wrestling promotion Dragon Gate, formed on October 13, 2010 after Naruki Doi turned on WORLD-1 and formed a stable with Yasushi Kanda, Kzy, Naoki Tanizaki and Takuya Sugawara. The stable later included Gamma and the was no name given and was dubbed as Team Doi (土井軍, Doi-gun). On January 14 WARRIORS joined Team Doi and later named their stable Blood WARRIORS.

Since the formation of BW, they started a feud with all stables in Dragon Gate, including WORLD-1, KAMIKAZE and Veteran-Gun. The three stables formed Junction Three and primarily feuded with Blood Warriors in a ten-month rivalry. During this rivalry, several members of BW were kicked out of the stable such as Dragon Kid and Gamma and several members joined the stable such as Cyber Kong, Tomahawk T.T, BxB Hulk, Akira Tozawa, Austin Aries and Uhaa Nation, also expanding in Dragon Gate USA winning the Open The United Gate Championship. By the end of 2011 Blood Warriors held every active single championship title in Dragon Gate including Open The Dream, Open The Brave, Open The Twin, Open The Triangle and Open The Owarai Gate Championship.

On January 19, 2012, Akira Tozawa and BxB Hulk turned on Blood Warriors leader CIMA, causing him to lose a ten-man "Loser Leaves Unit" tag team match; as a result, CIMA was kicked out of Blood Warriors. Later Yasushi Kanda, Genki Horiguchi and Ryo Saito, Naruki Doi and Naoki Tanizaki, were kicked out of Blood Warriors after he returned from the injury and saving CIMA from a post-match attack, and Doi, Horiguchi, Saito and Kanda after not needing their services. This led on March 1, Tozawa renaming the stable to MAD BLANKEY.

On October 13, 2010, Deep Drunkers were forced to split up, after losing a match against World–1 (BxB Hulk, Masato Yoshino and Naruki Doi), but after the match Doi turned on Yoshino and joined Takuya Sugawara, Yasushi Kanda and Kzy the former Deep Drunkers to form a new heel stable.[1] They however decided that Kenichiro Arai was not needed in the new group and kicked him out. On October 25 Sugawara, Tanizaki and Kanda defeated CIMA, Gamma and Genki Horiguchi to win the Open The Triangle Gate Championship.[2] On November 13, Gamma betrayed WARRIORS by revealing his partner as Naruki Doi for his upcoming Open The Twin Gate Championship match at Gate of Destiny, joining Doi's unnamed unit.

On January 14 CIMA and WARRIORS turned heel, revealing themselves as Metal Warriors who had been interfering in matches, and attacking Masato Yoshino and the WORLD-1 unit, before joining forces with Naruki Doi's unit.

On January 18 the new group was named Blood Warriors, a combination of the names of CIMA's two previous stables, Blood Generation and WARRIORS. On February 10 CIMA, Naruki Doi and Gamma defeated World–1 representatives Masato Yoshino, BxB Hulk and Susumu Yokosuka in a six-man tag team match and as a result, PAC was forced to leave WORLD–1 and join Blood Warriors. However, Ricochet blocked the move as he felt that he, not PAC, was the top high flyer in the world and instead challenged him to a match for his Open The Brave Gate Championship.[4] On February 6, 2011, Horiguchi and his Blood WARRIORS stablemate Ryo Saito defeated Don Fujii and Masaaki Mochizuki to win the Open The Twin Gate Championship. Two days later after the disbanding of KAMIKAZE Cyber Kong joined the stable. The title match between PAC and Ricochet took place on March 1 and ended with PAC retaining his title.[5] On April 3 at Dragon Gate USA at the Open The Ultimate Gate Austin Aries turned on Chuck Taylor, Johnny Gargano and Rich Swann the trio known collectively as Ronin and joined the stable claiming to have found his purpose under the leadership of CIMA.[6] On May 15, the rest of Blood Warriors turned on Dragon Kid and kicked him out of the group, despite the fact that he still held the Open The Triangle Gate Championship with CIMA and Ricochet, and replaced him with Tomahawk T.T. As a result, the titles were declared vacant.

On May 27, it was announced that one of the members of Blood WARRIORS would be expelled from the stable initallý CIMA was the one who was attacked but Metal Warrior attacked Gamma and the rest of Blood Warriors turned on him and gave his spot in the group to Kzy that was the Metal Warrior. On June 5 at Enter The Dragon Blood Warriors and Ronin faced each other in a six-man elimination tag team match which Ronin won after Johnny Gargano managed to submit both CIMA and Aries.[7] On June 8, before BxB Hulk was scheduled to team with Shingo Takagi, Naoki Tanizaki came out dressed as Black Hulk. With Takagi distracted with Tanizaki, Hulk hit Takagi with a chair, turning heel and joining Blood Warriors also Akira Tozawa made his return to Dragon Gate, joining Blood Warriors.[8] One Day later Aries left Dragon Gate USA and the unit. On June 19 Horiguchi and Saito would lose the twin gate titles to rival group Junction Three representatives, Dragon Kid and PAC, after the match all of the members of the stable attacked all members of Junction Three and CIMA and Ricochet stole the twin gate titles.

On July 17, CIMA and Ricochet defeated Dragon Kid and PAC of rival group Junction Three to win the Open The Twin Gate Championship, after the match CIMA and Ricochet started to show respect to Dragon Kid and PAC, but they attacked them, and in the process Naoki Tankizaki stole PAC's Open The Brave Gate Championship, claiming that he was the champion.[9] Later in the main event Hulk received his shot at the Open The Dream Gate Championship but was defeated by Masaaki Mochizuki.[10] On August 3 to August 7 Tozawa and Hulk, Kong and Tomahawk TT, Doi and Kanda, Kzy and Tanizaki and Horiguchi and Saito participated at the Summer Adventure Tag League but Horiguchi and Saito and Kong and Tomahawk TT were eliminated at the first round, at the second round Kzy and Tanizaki were eliminated and at the semifinals Doi and Kanda were eliminated and Tozawa and Hulk defeated Masaaki Mochizuki and YAMATO to win the Summer Adventure Tag League. On September 2, Kzy, Naoki Tanizaki and Naruki Doi defeated Gamma, Masato Yoshino and YAMATO to win the Open The Triangle Gate Championship. On September 11 at the Dragon Gate USA's Way of the Ronin 2011, CIMA and Ricochet defeated Masato Yoshino and PAC in a title vs. title match to win Open The United Gate Championship.[11] On September 24 CIMA defeated "Hollywood" Stalker Ichikawa to win the Open The Owarai Gate Championship but vacated title immediately after winning it. On November 4, 2011, Blood Warriors faced Junction Three in a ten-man tag team match with the stipulation that the loser of the fall had to leave his unit. In the end, YAMATO managed to win the match for Junction Three by submitting Kong with a sleeper hold, who was then kicked out of Blood Warriors.[12] On November 19, Ricochet defeated PAC for the Open The Brave Gate Championship.[13]

On November 30, in their PPV "Blood WARRIORS Independence Performance 1st Blood", Uhaa Nation joined the stable and later that night CIMA and Ricochet after their third successful defense, and vacated the twin gate titles in order for Ricochet to concentrate on defending the Open The Brave Gate Championship and CIMA to concentrate on chasing the Open The Dream Gate Championship.[14] On December 1, Tozawa and BxB Hulk defeated KAGETORA and Susumu Yokosuka to win the vacant Open The Twin Gate Championship, Tozawa's first title in Dragon Gate, and as a result Susumu and KAGETORA were forced to change their ring names to Jimmy Susumu and Jimmy KAGETORA. On December 25 at the Final Gate 2011, CIMA defeated Masaaki Mochizuki to win the Open The Dream Gate Championship for the third time.[15]

On January 19, 2012, BxB Hulk and Akira Tozawa with the help of Cyber Kong turned on CIMA, causing him to lose a ten-man "Loser Leaves Unit" tag team match; as a result, CIMA was kicked out of Blood Warriors and Cyber Kong rejoined the stable.[16] After Ricochet continued to team with CIMA in Dragon Gate USA, later on February 9, he alongside Saito and Horiguchi were also kicked out of Blood Warriors. Later that night Tozawa-led Blood Warriors won their feud with Junction Three by defeating them in a fourteen-man elimination tag team match, forcing their rival group to disband.[17] On February 26 Kanda was kicked out of the stable and later Doi was also kicked out. On March 1, Tozawa renamed the stable to MAD BLANKEY.[18] 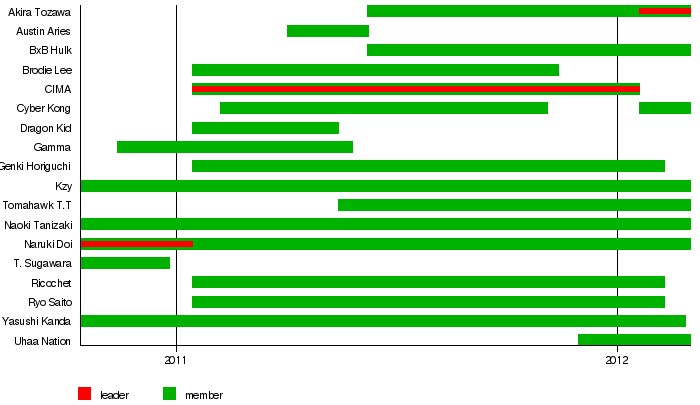 3Championship not recognized by Dragon Gate.

4Tanizaki never won the championship, he stole it from Rich Swann and proclaimed himself champion in his place. 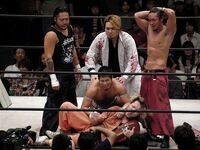 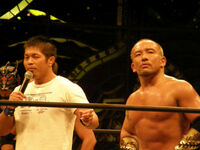 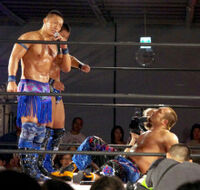 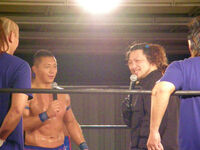 Blood Warriors after Kzy revealed to be the Metal Warrior 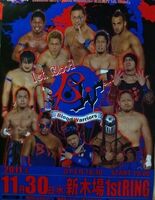 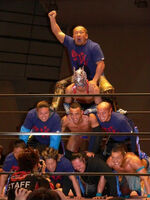 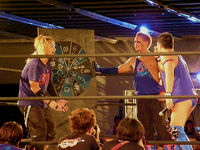 Blood Warriors with the Doi Darts 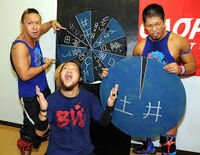 Blood WARRIORS with all champions in Dragon Gate. 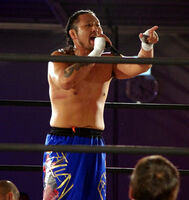 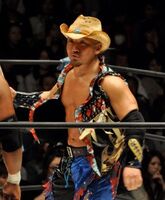 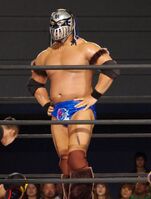 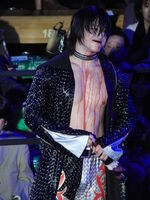 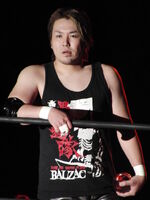 Takuya Sugawara
Add a photo to this gallery

Tanizaki with the Stolen Open the Owarai Gate Championship belt 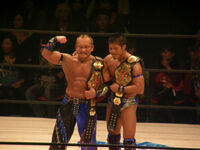 Naruki Doi and Gamma as the Open The Twin Gate Champions 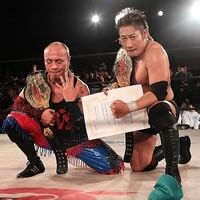 CIMA and Ricochet as the Open The Twin Gate Champions 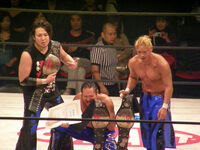 Sugawara, Kanda and Tanizaki as the Open the Triangle Gate Champions

CIMA, Dragon Kid and Ricochet as the Open the Triangle Gate Champions 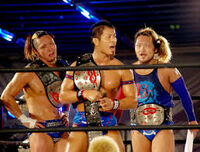 Doi, Tanizaki and Kzy as the Open the Triangle Gate Champions

Retrieved from "https://puroresusystem.fandom.com/wiki/Blood_WARRIORS?oldid=58455"
Community content is available under CC-BY-SA unless otherwise noted.