The DDT Extreme Division Championship is a secondary singles championship in DDT Pro-Wrestling (DDT) promotion. The title is defended exclusively in hardcore matches, with the defending champion being given the right to choose the match stipulation.

The championship was established on November 23, 2006 after MIKAMI defeated Sanshiro Takagi in a no-disqualification match, MIKAMI was awarded the championship. The title has also been defended at events held by Union Pro Wrestling, one of DDT's former sub-brands.

The defending champion his given the right to choose the match stipulation, with this being a Hardcore match, Cage match, Tables match and TLC match, which were defended in the past. But it has also been defended in matches specially created by the champion to play to his strengths or to expose the challenger’s weaknesses, including a “Noise Prohibition” match where you are penalized for making a noise, the “No-No DQ Ironman” match where even the slightest move that is against the rules gets you instantly disqualified, and the “World of Kiss” match, where you have to kiss your opponent while pinning or submitting him in order to win. 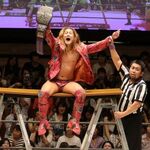