Deep Drunkers (ディープ・ドランカーズ, Dīpu doakāzu) was a professional wrestling stable in the Japanese promotion Dragon Gate, formed on March 3, 2010 after the split from Real Hazard with Takuya Sugawara, Yasushi Kanda, Kzy and Kenichiro Arai renaming the stable to Deep Drunkers only held the Open The Triangle Gate Championship with Kzy, Kanda and Sugawara winning the titles. Later in September Naoki Tanizaki turned on his WORLD-1 unit and turned heel joining Deep Drunkers.

On October 13, 2010, the Deep Drunkers were forced to split up, after losing a match against World–1 (BxB Hulk, Masato Yoshino and Naruki Doi), but after the match Doi turned on his partners to form a new stable with Tanizaki, Kanda, Kzy and Sugawara. They, however, decided that Arai was not needed in the new group and kicked him out.

On January 10, 2010, Genki Horiguchi put out a blog where he stated that Real Hazard would win more matches via teamwork instead of illegal tactics and weapons play in 2010. During a tag match Yasushi Kanda had with Horiguchi that day, he tried to utilize a blue box to gain an advantage, but Horiguchi prevented him from doing so. Though they still won, Horiguchi's actions caused them to begin bickering. The bickering intensified the following day, when he made Horiguchi lose a tag team match by accidentally hitting him. Eventually, Real Hazard became divided over the "clean fighting" issue. Genki would be joined by Susumu Yokosuka and K-ness in his quest for clean fights, while Kanda was supported by Kzy and Takuya Sugawara in the pursuit of continuous use of illegal tactics to win matches. After Yokosuka, K-ness, Horiguchi and Ryo Saito left Real Hazard a couple of weeks later, he the rest of Real Hazard renamed their stable to Deep Drunkers.

On May 5 Kzy, Sugawara and Kanda defeated Akebono, Don Fujii and Masaaki Mochizuki to win the Open The Triangle Gate Championship. However eight days later Kzy, Sugawara and Kanda lost the titles to WARRIORS (CIMA, Gamma and Genki Horiguchi). On June 13, 2010 Naoki Tanizaki started showing some heel tendencies during his match against Super Shisa where he used a low blow to set up for his Implant finisher. Later during the main event he almost cost his fellow World-1 teammate Masato Yoshino a chance at becoming the number one contender for YAMATO's Open The Dream Gate Championship by mistakenly hitting him with the Deep Drunkers signature Blue Box nearly costing him the match with Sugawara. On August 24, 2010 Naoki Tanizaki accidentally cost his team the win against Deep Drunkers after a misfired Protein Powder attack struck PAC leading to their loss, he quickly apologized to his partners after they questioned what was wrong with him lately and told them everything was fine. On August 29, 2010 Kzy competed in a tournament to crown a new Open The Brave Gate Championship after Masato Yoshino vacated the title and Kzy defeated Naoki Tanizaki at the first round but was eliminated at the semifinals by Susumu Yokosuka.

On September 17, 2010 following another loss, Tanizaki finally snapped as he and his partner BxB Hulk argued over the loss and was stopped by Dr. Muscle who then attacked BxB Hulk and gave him an Implant, he offered a handshake to Tanizaki and was refused. Later on in the main event pitting his World-1 teammates Masato Yoshino and Naruki Doi against K-ness and Susumu Yokosuka for the Open The Twin Gate Championship he attacked both Yoshino and Susumu giving both men an Implant but then laying Yokosuka over Yoshino costing them the titles. He further cemented his betrayal of World-1 by joining up with Deep Drunkers thus completing his heel turn. On October 3, 2010 he went on to win the Three Way Match between himself, Hulk, and Doi following interference from his new Deep Drunkers teammates as he eliminated both men and went so far as to mock them by saying their diamonds were probably made of glass, a knock on the World-1 logo. On October 13, 2010, the Deep Drunkers were forced to split up, after losing a match against World–1 (BxB Hulk, Masato Yoshino and Naruki Doi), but after the match Doi turned on his partners to form a new stable with Tanizaki, Kanda, Kzy and Sugawara. They however decided that Arai was not needed in the new group and kicked him out. After the match Doi turned on Yoshino and joined the former Deep Drunkers to form a new heel stable.

The original members of Deep Drunkers 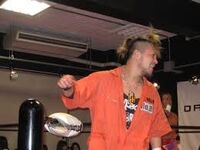 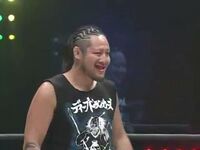 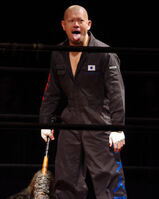 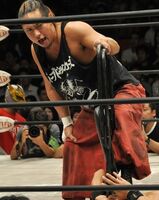 Naoki Tanizaki
Add a photo to this gallery 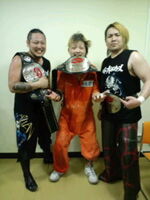 Kzy, Sugawara and Kanda as Open The Triangle Gate Champions
Add a photo to this gallery

Retrieved from "https://puroresusystem.fandom.com/wiki/Deep_Drunkers?oldid=33279"
Community content is available under CC-BY-SA unless otherwise noted.