Do FIXER was one of the heel stables in the Toryumon Japan promotion and face stable in Dragon Gate. It was formed in October 28, 2002 by Darkness Dragon. The stable was disbanded in February 4, 2007 when Genki Horiguchi turned on Ryo Saito. Saito with Dragon Kid formed a stable with Cima, Anthony W. Mori and Susumu Yokosuka named Typhoon.

On October 22, 2002 Darkness Dragon and Dragon Kid formed a stable named Do FIXER. On October 28 Magnum TOKYO dissolved M2K when Yasushi Kanda got retired and they announced that he and the remnants of M2K were the real Do FIXER, that Darkness Dragon - now renamed K-ness - was still a member of the group and was sent into the home army (Seikigun) to cause problems within it. At end of 2002 Dragon Kid betrayed Darkness Dragon in a tag team match when he walked away of the match. Later Darkness Dragon renamed imself to K-ness. In December Ryo Saito joined the stable betreying Anthony W. Mori and proving his allenignece to the stable. On April 22, 2003 Genki Horiguchi lost against Cima in a tournament final to become the Último Dragón Gym Championship. On May 16, 2003 Genki Horiguchi, Ryo Saito and Susumu Yokosuka defeated Crazy Max (Cima, Suwa and Big Fuji) for the UWA World Trios Championship. On June 29, 2003 Magnum TOKYO defeated CIMA for the Último Dragón Gym Championship and also Horiguchi, Saito and Yokosuka lost the UWA World Trios Championship to Keni'chiro Arai, Dragon Kid and Masaaki Mochizuki. At the end of 2003 there had been problems between Magnum TOKYO and the remaining stable members. On September 26, 2003 in a five-way match Magnum Tokyo betrayed Horiguchi and his head was shaved. On February 8, 2004 K-ness had a shoulder injury and missed in a long-term. On June 2004 Susumu Yokosuka left the stable. On July 4 K-ness left the stable and recreated the Final M2K. On the next day Último Dragón left the Toryumon Gym in Mexico and took the name and trademarks with him. The promotion subsequently changed its name to Dragon Gate also Magnum TOKYO and Dragon Kid joined the stable. On November 2004 Naoki Tanisaki joined the stable and later the stable turned face.

On April 23, Ryo Saito lost the Open Dream Gate Championship to Susumu Yokosuka. At the end of 2006 there had been problems between Ryo Saito and Genki Horiguchi and they were in a disagreement. On September 30 Kid, Horiguchi and Ryo Saito defeated Blood Generation (CIMA and Jack Evans) and BxB Hulk for the Open the Triangle Gate Championship, Fifty days later they had to vacate the titles due to Kid suffering from appendicitis they didn't had a rematch due to Dragon's sustained illness. On February 4, 2007 Genki Horiguchi turned on Ryo Saito and the stable was disbanded. Later On February 27, Saito with Kid formed a stable with Cima, Anthony W. Mori and Susumu Yokosuka named Typhoon.

The original members of Do FIXER 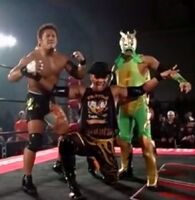 Do FIXER post Naoki Tanizaki's betrayal, K-ness and Susumu Yokosuka and Magnum TOKYO left
Add a photo to this gallery 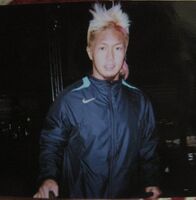 Susumu Yokosuka
Add a photo to this gallery

68.jpg|Kid, Horiguchi and Saito as the Open the Triangle Gate Champions 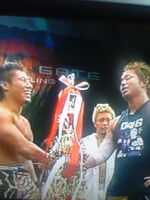 Saito as the winner of the 2005 King of Gate
Add a photo to this gallery
Retrieved from "https://puroresusystem.fandom.com/wiki/Do_FIXER?oldid=25280"
Community content is available under CC-BY-SA unless otherwise noted.