Dr. Muscle (Dr.マッスル, Dr. Massuru) is a mysterious masked wrestler in Dragon Gate who wears a jumpsuit and white lab coat covered in (what appears to be) blood.

Originally this was a gimmick planned for T2P graduate and former Florida Brother, Raimu Mishima. However, Raimu was forced into retirement due to injuries.

Despite this, Dr Muscle continued to show up in Muscle Outlaw’z matches. The reality is that many different wrestlers have been donning the Dr Muscle outfit. The clue is usually which of whatever team he is aligned with is missing from ringside when he appears.

Due to this fact though, many wrestlers have used the Dr Muscle outfit to double-cross his team, usually unmasking after the fact. He has also been used to disguise the return, or eventual alliance turns of wrestlers (such as Kzy's defecting from MAD BLANKEY to Dia. Hearts and Kotoka's turning on VerserK's newest members only to be kicked out himself). Gamma used the disguised to join Junction Three after drawing similarities between his Open the Gamma Gate reign and Naoki Tanizaki's Blood Warriors Authorized Brave Gate reign, with Gamma's major gripe being Gamma having won the belt in his run where as Tanizaki simply stole his while PAC was out of the country).

In 2017 VerserK announced that a Dr. Muscle would join the unit but this time he would be called Dr. VerserK (Dr.ヴェルセルク, Dr. Veruseruku). On February 2 Dr. VerserK revealed himself as Punch Tominaga, rejoining VerserK.

As a general rule, Dr. Muscle is always aligned with whatever the heel faction is in Dragon Gate at the time. But recently Dr. Muscle aligned himself with face wrestlers, having heel wrestlers turning face, or sometimes face wrestler reaffirming their face status (such as Naruki Doi used the guise to reform his alliance with Masato Yoshino and forming an alliance with Kotoka and Ben-K.). He also tends to use miscellaneous moves of Dragon Gate wrestlers, even if they've got an alibi to not being Dr Muscle, to hide his actual identity. Following Muscle Outlaw'z disbanding, Dr. Muscle vowed to carry on the MO'z name until the end of time, including their theme, Idiot Outlaw.

Dr. Muscle in his way to the ring

Dr. VerserK (is still Dr. Muscle but with VerserK instead of Muscle)

Dr. Muscle as the Open The Brave Gate Champion

R.E.D's Red and Green Masked Demons
Add a photo to this gallery 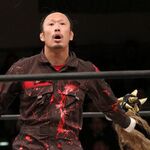 BxB Hulk as the Red Masked Demon
Retrieved from "https://puroresusystem.fandom.com/wiki/Dr._Muscle?oldid=50116"
Community content is available under CC-BY-SA unless otherwise noted.