Dragon Gate Generation, commonly abbreviated as Dragon Gate (ドラゴンゲート, Doragon Gēto) is a professional wrestling stable in the Dragon Gate (DG) promotion. The stable was founded on December 18, 2019, by Ben-K, Kzy and YAMATO and various wrestlers from the Dragon Generation of wrestlers, in which most of them were trained by the promotion as part of the Dragon Gate Trueborn system.

The stable was founded after various members of some stables from Dragon Gate such as Mochizuki Dojo, Natural Vibes and Tribe Vanguard suspended their respective stables to unite all wrestlers from the Dragon Gate generation to form the stable, with the goal of surpassing the Toryumon generation and establish themselves as the future of the promotion. Since its establishment, the stable entered in a "Generation War" against Toryumon and R.E.D. In the short time of their formation, Dragon Gate founding members Ben-K, Dragon Dia, and Strong Machine J quickly brought the Open The Triangle Gate Championship to the stable.

On December 18, 2019, BxB Hulk turned on YAMATO to join the villainous stable R.E.D, revealing himself to be the Red Masked Demon. Afterwards, YAMATO was joined by Ben-K and Natural Vibes' leader Kzy, who decided to form an alliance, making way for a temporary cease-fire between some stables in Dragon Gate such as Natural Vibes and Tribe Vanguard, suspending the respective stables to unite all wrestlers from the Dragon Gate generation, with the goal of surpassing the Toryumon generation and establish themselves as the future of the promotion. Ben-K, Kzy, and YAMATO were joined by various Dragon Gate wrestlers that were trained by the promotion, leading also Mochizuki Dojo and Strong Machines to be suspended in order to join stable. Afterwards, Dragon Gate began a "Generation War" against Toryumon and R.E.D. On December 22, YAMATO forfeited his half of the Open The Twin Gate Championship, leading to Hulk protest against the decision. Afterwards, General Manager Takayuki Yagi declared the titles vacated, with the new champions being crown in a tournament in January. KAI would announce his entrance to the tournament, with the purpose of preventing Hulk from regaining the Open The Twin Gate Championship and avenging his betrayal of Tribe Vanguard.

On December 26, Dragon Gate announced the participating teams in a tournament to crown the new Open The Twin Gate Champions. In the tournament, Dragon Gate would be represented by five teams taking part in the tournament to crown the new Open The Twin Gate Champions, Ben-K and YAMATO; Kzy and Dia; KAI and Machine J; Lee and Maria; Okuda and Tominaga. All five teams failed to win the tournament, with Ben-K and YAMATO being defeated in the finals of the tournament by the R.E.D duo of BxB Hulk and Kazma Sakamoto on January 15. Afterwards, YAMATO attempted to get a rematch for the titles, but Hulk initially rejected, he only accepted when he announced that his R.E.D stablemate Eita would be his partner, leading Masato Yoshino and Toryumon newest member Shuji Kondo to be involved in the match, due R.E.D attacking Yoshino earlier that night. During the event, Machine challenged R.E.D to a match to a match for the Open The Triangle Gate Championship, after both Machine and Toryumon's Ryo Saito pinned one-third of the Open The Triangle Gate Champions H.Y.O. KAI refused to be Machine's partner to get revenge on BxB Hulk, leading Maria and Okuda to be Machine's partner. Meanwhile, Kzy proclaimed himself as the next challenger to Naruki Doi's Open The Dream Gate Championship. Later that month, two teams of Dragon Gate took part in the 2020 Ashiyanikki Cup 6 Man Tag Team Tournament, Ben-K, Machine and Dia; and YAMATO, KAI, and Kzy. In the first round, YAMATO, KAI and Kzy were eliminated from the tournament by the R.E.D trio of Big R Shimizu, Eita, and Kaito Ishida, after BxB Hulk interfered in the match. Meanwhile, KAI got his revenge on Hulk, after costing him and his partners Kazma Sakamoto and Takashi Yoshida their semifinal match against Ben-K, Machine, and Dia. On January 26, Ben-K, Machine, and Dia defeated R.E.D (Eita, Ishida, and Shimizu) in the finals to win the tournament.

The second big event of the storyline was on February 7 with a card full of matches between members of Dragon Gate, Toryumon, and R.E.D. In that night, Machine, Maria, and Okuda failed to win the Open The Triangle Gate Championship in a three-way match involving Toryumon (Dragon Kid, Ryo Saito, and Kenichiro Arai). Later that night, KAI and YAMATO were the first team to be eliminated from the match, after YAMATO was pinned by BxB Hulk. Afterwards, General Manager Takayuki Yagi announced a six-way match between all wrestlers that took part in the match. However, the match ended up being canceled, because of the Coronavirus (COVID-19) pandemic. On February 29 on the first night of the Champion Gate in Osaka, Ben-K, Machine, and Dia defeated Toryumon's Dragon Kid, Ryo Saito, and Kenichiro Arai to win the Open The Triangle Gate Championship. On March 3, Yoshioka announced in his blog that he was going on a learning excursion. From May 15 to June 6, nine members of Dragon Gate took part in the 2020 King of Gate. Only YAMATO reached the semifinals, losing eventual winner Eita. 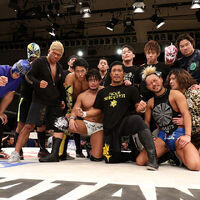 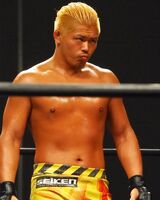 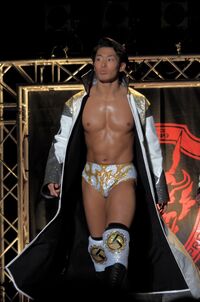 KAI
Add a photo to this gallery 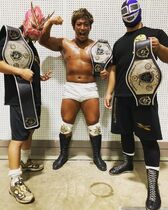 Ben-K, Dia and Machine J as Open The Triangle Gate Champions
Add a photo to this gallery 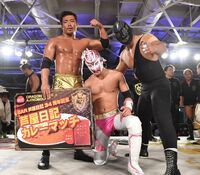 Ben-K, Dragon Dia and Strong Machine J as the winners of the 2020 Ashiyanikki Cup 6 Man Tag Team Tournament
Add a photo to this gallery
Retrieved from "https://puroresusystem.fandom.com/wiki/Dragon_Gate_(stable)?oldid=53730"
Community content is available under CC-BY-SA unless otherwise noted.