The F-1 (Fake-1 Grand Prix) Tag Team Championship (F-1（フェイク-1グランプリ) タッグ選手権/F-1 (feiku-1 guranpuri) taggu senshuken) was an unofficial tag team title in All Japan Pro Wrestling that apparently was not recognized by the promotion. It’s more of a comedy title as matches are a mix of regular wrestling and impromptu standup comedy routines involving the wrestlers.

It was created by Keiji Mutoh in December 2006, and he & Japanese comedian Kannazuki were the first to win the titles. On August 30, 2015 on Keiji Mutoh promotion's Wrestle-1 it was announced that they are going to revive the titles and on October 9, 2015 are going to have a new champions. At Wrestle-1 Tour 2015 Fan Appreciation Day Keiji Mutoh and Kannazuki defeated Manabu Soya and Sugichan to win the titles for their second time, it is their first time as the F-1 Tag Team Champions in the Wrestle-1 promotion.

Keiji Mutoh and Kannazuki with the original title belts (AJPW) 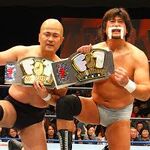 Kannazuki and Takao Omori
Retrieved from "https://puroresusystem.fandom.com/wiki/F-1_Tag_Team_Championship?oldid=51994"
Community content is available under CC-BY-SA unless otherwise noted.