The GHC Heavyweight Championship is a professional wrestling heavyweight championship owned by the Pro Wrestling NOAH (NOAH) promotion. "GHC" is the acronym of NOAH's governing body, the Global Honored Crown. The title was created on April 15, 2001 when Mitsuharu Misawa defeated Yoshihiro Takayama in a 16-man tournament final. Though its name implies a particular weight class, it has been held by junior heavyweights in the past, including Yoshinari Ogawa and former GHC Junior Heavyweight Champion Naomichi Marufuji. All GHC Heavyweight Title matches and contract signings were overseen and introduced by GHC title commissioner Joe Higuchi until October 2010 when Higuchi died, at which time he was replaced by Harley Race.

Throughout the history of the championship, the title as vacant one, due to the reigning champion Jun Akiyama was forced to forced to relinquish the title due to herniated discs in his back. Then it was held a decision match to determine the new champion.

Overall, there have been a total of 17 recognized champions, who have had a combined 3 official reigns. Title changes happen at NOAH-promoted events or tours. Mitsuharu Misawa is the first and oldest champion in the title history, at 46 years old. Takashi Sugiura holds the record for most reigns, with 4 reigns. His first reign had the most title defenses during a single reign with 14 successful defenses. Over his 4 reigns, Sugiura successfully defended the title 23 times, the most of any champion. Sugiura, with a combined 4 reigns, holds the record for most days as champion at 1,067 days. At 735 days, Kenta Kobashi's reign is the longest reign in the title's history. Yoshihiro Takayama's reign holds the record for shortest reign at 16 days. With zero sucessful title defenses, Takayama's only reign, Morishima's third reign and Marufuji's third reign are all tied for least successful defenses. Go Shiozaki became the first freelancer to win the championship after defeating Takashi Sugiura on May 28, 2016.

Eddie Edwards became the first gaijin to hold the GHC Heavyweight Championship after defeating Katsuhiko Nakajima on August 26, 2017. On November 6, 2017 in Canada, Edwards made his second defense of the GHC Heavyweight Championship against El Hijo del Fantasma, being the first title defense made outside NOAH territory. On December 16, 2018 at Great Voyage in Yokohama vol.2, Kaito Kiyomiya became the youngest champion in the title's history at 22 years old.

In January 2019, LIDET Entertaniment took over the ownership of Pro Wrestling Noah and as a plan to relaunch the promotion as the second top promotion in Japan, Noah announced that the GHC Heavyweight Championship would be defend in the Ryōgoku Kokugikan, while also announcing the creation of second version of the title to replace the first version, which was unveiled on September 20.

NOAH held a 16-man tournament to crown the first champion, held over its month-long, 18-event Navigation for the Victory GHC tour. The tour was held from March 18 through April 15, 2001.

† Akiyama and Misawa were both counted out, but the match was restarted. 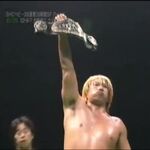 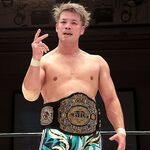 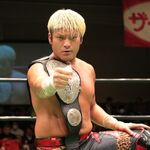