Between 2004 and 2009, Pro Wrestling Noah promoted the GHC Openweight Hardcore Championship. During the title's history, the title was seen as a semi-official title, and sometimes it turned to singles or tag team title. During these years, Noah had attempted to establish a tertiary championship to elevate its wrestlers such as Jun Akiyama and Naomichi Marufuji, but their concept didn't work and the title started to be seen as comedy championship, leading to the title being retired on December 23, 2009. In January 2019, LIDET Entertainment took over the ownership of Noah and on October 3, Riki Choshu announced on behalf of LIDET Entertainment, the creation of the GHC National Championship, with the inaugural champion crowned being crowned on November 2, 2019, at Noah the Best 2019, in a match between Michael Elgin and Takashi Sugiura. The title would also serve as a secondary heavyweight championship for the promotion. Instead, it was later announced that the title would be an openweight title, with both heavyweight and junior heavyweight wrestlers being eligible to challenge for it, being a secondary title for any division in Noah. The title was scheduled to be defended exclusively in Japan and was part of a plan by LIDET Entertainment to relaunch the promotion, as the second largest promotion in Japan. On November 2, 2019, Takashi Sugiura went on to defeat Michael Elgin to become the inaugural GHC National Champion, before losing the title to Katsuhiko Nakajima on May 9, 2020. 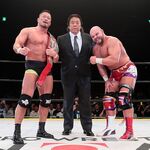