The Global Junior League is a round-robin tournament held by Pro Wrestling NOAH. The purpose of the tournament is to determine the promotion's top junior heavyweight wrestler. It was originally designed to be an annual event starting in 2009, but the second tournament did not take place until 2015 and a third tournament did not take place until 2018. The tournament is a two-block round-robin tournament, much like New Japan Pro Wrestling's Best of the Super Juniors tournament, in which each block's two highest scorers face off in the semifinals. A victory is worth two points, a draw was worth one, and a loss zero; each match has a thirty-minute time limit. Being a professional wrestling tournament the outcome of the matches and the tournament itself are not determined through pure athletic competition but through pre-determined outcomes to matches.

The first tournament, named simply Junior Heavyweight League, was held from October 15 to October 31 over nine shows, and featured two blocks of five. Foreign participation included Delirious from Ring of Honor and Jushin Thunder Liger from New Japan Pro Wrestling. The winner, Yoshinobu Kanemaru, also won the vacant GHC Junior Heavyweight Championship. Delirious was awarded place in the semi-final because original block A runner-up Kotaro Suzuki had to withdraw with a flu.

The tournament after a four year break the Global Junior Heavyweight League returned, would take place from September 8 to October 4, 2018. The tournament would include two outside participant from Pro Wrestling Zero1 Ikuto Hidaka and the returning Kotaro Suzuki who would return five years after leaving the promotion. In this year's tournament, reigning GHC Junior Heavyweight Champion Daisuke Harada took part of the tournament.

The 2019 Global Junior League took place from June 27 to July 27, 2019, and included one outside participant from International Pro Wrestling: United Kingdom Chris Ridgeway.

The 2020 Global Junior League took place from January 10 to January 30, and includes one outside participant from Michinoku Pro-Wrestling Dick Togo. After Noah was acquisitioned by CyberAgent, it was announced the finals of the tournament would be streamed on DDT's internet streaming service DDT Universe. 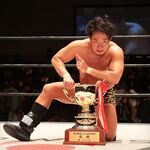 HAYATA
Community content is available under CC-BY-SA unless otherwise noted.