The Global Tag League is a round-robin tag team tournament held by Pro Wrestling NOAH. It was created in 2008. The tournament is similar to NJPW's World Tag League and it's held every March until April. On rare occasions, the tournament was held in April until May.

The is held under a points system, with two points for a win, one for a time limit draw and none for any other kind of a draw or a loss. The team finishing atop the points standings are the winners. Matches in the have a 30-minute time limit, which is the same as matches for NOAH's GHC Tag Team Championship.

In the below results, (C) signifies the GHC Tag Team Champions at the time of each tournament.

The 2010 ran from January 9 through January 24. It was the first edition of the featuring a block system, with eight teams in two blocks of four. The top finishing teams from each block met in the final.

The 2011 ran from April 16 to April 29 in the tournament's original round-robin format.

The 2012 ran from April 11 to April 29 in the tournament's original round-robin format.

The 2013 ran from April 13 through April 28. The 2013 edition was only the second to feature two blocks of teams; each consisting of five, with the top teams from each block meeting in the final. Naomichi Marufuji was sidelined with a knee injury on April 14 after his and Takashi Sugiura's first match, a win over Shinya Ishikawa and Yoshihito Sasaki, had already taken place. On April 17, Noah announced that Atsushi Kotoge would replace Marufuji in the tournament, but instead of inheriting Marufuji's and Sugiura's points, they would start at zero points and face Ishikawa and Sasaki in a new match.

The 2015 ran from April 19 through May 4. Takeshi Morishima was scheduled to enter the tournament, but was forced to pull out due to injury and was replaced by Super Crazy.

The 2017 featured eight teams, and was held from April 22 to May 4. On April 26, the team of Bram and Robbie E was removed from the league with the two forfeiting the rest of their matches, due to controversial Instagram posts made by Bram.[1]

The 2018 version was announced to take place between March 18 and April 11, covering ten shows. On March 21 it was announced that Kaito Kiyomiya had suffered a concussion and was unable to compete due to doctors order and he and Go Shiozaki had to forfeit their match against Maybach Taniguchi and Mitsuya Nagai

The 2019 version was announced to take place between April 6 to May 5.

The 2020 version was announced to take place between April 4 through April 18. On March 30, Noah it was initially announced that some shows of the tournament, while the April 15 show would be held behind closed doors, being streamed on DDT Universe, due to restrictions made by the Japanese government regarding the 2019-20 coronavirus (COVID-19) pandemic. However, it was later announced that the entire tournament would be held behind closed doors and the shows would be streamed on the DDT Universe, with the tournament taking place in a format under the NOAH TV Match name. The tournament included outside participation from Big Japan Pro Wrestling's Daisuke Sekimoto, who teamed with Yoshiki Inamura for the tournament. 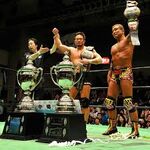