In February 2011, IGF started a tournament to determine the first ever IGF Champion, which eventually led to a final match between Jérôme Le Banner and Josh Barnett. However, just days prior to the final match taking place, IGF announced on August 19 that Barnett would not be able to attend the event. On August 22, IGF declared Le Banner the first champion. The title was founded as a puroresu championship, but has since December 31, 2013, been contested in legitimate mixed martial arts fights. 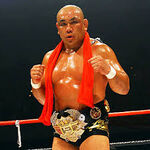