he IWGP Heavyweight Championship (IWGPヘビー級王座, IWGP Hebī-kyū Ōza) is the top singles championship in the New Japan Pro Wrestling (NJPW) promotion. "IWGP" is the acronym of NJPW's governing body, the International Wrestling Grand Prix. The title was introduced on June 12, 1987, in the finals of an IWGP tournament, which was won by Antonio Inoki. The current champion is Kazuchika Okada, who is in his fifth reign.

Since its inception title has been considered to be the most prestigious championship belt in NJPW and one of the most respected in Japanese professional wrestling and its promoted as NJPW's sole primary championship. The championship has been represented by four different belts. The current fourth generation belt was introduced in March 2008.[1] The title forms what has unofficially been called the "New Japan Triple Crown" (新日本トリプルクラウン, Shin Nihon Toripuru Kuraun) along with the IWGP Intercontinental and NEVER Openweight Championships.[2] The championship has headlined several pay-per-view events, most importantly in the Tokyo Dome and has been defended in MMA matches, when NJPW was on its period of decline.

Title changes happen at NJPW-promoted events. Big Van Vader, Salman Hashimikov, Scott Norton, Bob Sapp, Brock Lesnar, A.J. Styles, Kenny Omega and Jay White are the eight non-Japanese wrestlers to have held the title, with Hashimikov being the first and only Soviet-born champion[3], while Omega is the first Canadian-born champion and White is the first New Zealander-born champion.

The early version of this championship was introduced in 1983 for the winner of the IWGP League 1983. Since then, the championship was defended annually against the winner of the IWGP League of the year. Wrestlers such as André the Giant and Hulk Hogan have also won the title has part of the tournament. Antonio Inoki would become the inaugural champion on June 12, 1987, after winning the 1987 IWGP League by defeating Masa Saito in the finals. The following champions would be forced to relinquish the title due to an inability to participate in title defenses.[4] NJPW would hold a new tournament to determine the new champion.

Since its establishment, the title has been defended in the biggest arenas in Japan such as Ryogoku Kokugikan, Osaka-jō Hall, Nippon Budokan and Tokyo Dome and has also been defended for the first time in the United States on December 12, 1988, when Tatsumi Fujinami defended the title against Tommy Lane.

In 1995, NJPW had a feud with shoot style wrestling promotion UWF International, which featured the title being defended during the feud. The title would be defended in the Tokyo Dome on January 4, 1996, drawing 67,000 fans in attendance, which was the largest crowd and gate in Japanese wrestling history at the time. Three months later, Nobuhiko Takada defeated Keiji Mutoh, with 64,000 fans in attendance, in a unification match, where Takada's Pro-Wrestling World Heavyweight Championship was on the line to capture the title. With Takada, the championship would be defended for the second time outside of NJPW, during a UWFI, with Takada retaining the title against Shiro Koshinaka on March 1. Takada would lose the title to Shinya Hashimoto on April 29 in the Tokyo Dome, which marked the end of the feud between NJPW and UWFI. During Hashimoto's reign, NJPW would create the second design of the title, replacing the previous one created by Antonio Inoki. Hashimoto's reign was also notable for being the longest reign in the title's history at 489 days.

On September 23, 1998, Scott Norton became the second gaijin, after Salman Hashimikov and the first American wrestler to win the title by defeating Yuji Nagata.

Period of Decline and return of second title belt

In 2001, during a PRIDE event, Kazuyuki Fujita was awarded the first version of the championship by Antonio Inoki, but the champion at the time was Scott Norton, leading to a unification match on April 9, which was by Fujita. His reign would end on January 4, 2002 at the Wrestling World, after Fujita vacated the title due to being an injury in his achilles tendon, marking the first time the title was not defended in the main event of the Tokyo Dome. Instead, the main event of the show was given to NJPW's rival Pro Wrestling NOAH's GHC Heavyweight Championship, devaluating the IWGP Heavyweight Championship.

In 2006, Brock Lesnar was stripped of the title for being unable to defend it; however, Lesnar claimed he was owed money by NJPW and didn't want to lose the title to Hiroshi Tanahashi, keeping the physical belt, which forced NJPW to return to the second version of the title. Lesnar signed with Antonio Inoki's Inoki Genome Federation (IGF) in 2007 and lost the championship to Kurt Angle on the inaugural broadcast.

After Brock Lesnar vacated the title, NJPW would host a six-man tournament to crown a new champion. Hiroshi Tanahashi would defeat Giant Bernard in the finals of the tournament to become the new champion. Tanahashi's reign would mark NJPW returning to its strong style roots and rise back to be the top promotion in Japan. Matches for the title were only accepted for wrestlers at a minimum weight of 220 lb (100 kg) under the IWGP Heavyweight Championship rules. However, Koji Kanemoto challenged Tanahashi for the title on February 18, 2007, allowing wrestlers with less than 100 kg to challenge for the title, eliminating the weight restrictions rules.

During Shinsuke Nakamura's second reign as champion, Nakamura defeated Kurt Angle in a unification match on February 17, 2008, at the Circuit2008 New Japan Ism tour to win the IGF version of the IWGP Heavyweight Championship or the IWGP 3rd Belt Championship, known in NJPW, unifying it with the NJPW version of the title. On March 2 at Pro Wrestling Zero1-Max's 7th-anniversary show, Nakamura defeated Pro Wrestling Zero1-Max's Kohei Sato. After the match, Nakamura handed the second version of the title to Shinya Hashimoto's son Daichi Hashimoto, to honor his father death, leading NJPW to create a fourth version of the title to replace the second version, which was unveiled on March 7. Nakamura lost the IWGP Heavyweight Championship to All Japan Pro Wrestling (AJPW) representative Keiji Mutoh on April 27. Hiroshi Tanahashi would return the title to NJPW, after defeating Mutoh on January 4, 2009 at Wrestle Kingdom III in Tokyo Dome. On May 14, 2011 at NJPW Invasion Tour, Hiroshi Tanahashi defended the IWGP Heavyweight Championship for the first time in twenty-two years in the United States, defeating Charlie Haas. Tanahashi's reign was also notable, due to Tanahashi surpassing Yuji Nagata record setting successful title defenses, with 11. On May 3, 2014 at Wrestling Dontaku, A.J. Styles became the third American wrestler to hold the IWGP Heavyweight Championship. Styles would lose the title to Hiroshi Tanahashi, who broke Tatsumi Fujinami's record for most reign as champion, with seven.

On June 19, 2016 at Dominion 6.19 in Osaka-jo Hall, Kazuchika Okada won the IWGP Heavyweight Championship for the fifth time. During his reign, Okada defended the title against Kenny Omega on January 4, 2017 at Wrestle Kingdom 11 in Tokyo Dome. At 46 minutes and 45 seconds, the match was the longest in the history of the January 4 Tokyo Dome Show. Wrestling journalist Dave Meltzer gave the match a six-star rating in his Wrestling Observer Newsletter, adding that Okada and Omega "may have put on the greatest match in pro wrestling history" and that it was the best match he had ever seen. The match was also praised by the likes of Daniel Bryan, Mick Foley and Stone Cold Steve Austin. Okada and Omega would face each other for the second time on June 11 at Dominion 6.11 in Osaka-jo Hall, which ended in NJPW's first 60-minute time limit draw in 12 years. This match was rated 6¼ stars by Dave Meltzer, higher than their previous match, making it the highest rated match by Meltzer at that time. Okada's reign would also be notable for being the longest reign in the title's history with 720 days, breaking the previous record of 489 days, held by Shinya Hashimoto. He also broke Hiroshi Tanahashi's record of 1,358 combined days as champion, ending his reign with 1,516 combined days as champion and also broke Tanahashi's record of eleven successful title defenses, with 12 successful title defenses, after defeating Tanahashi on May 4, 2018 at Wrestling Dontaku, earning a 5 1/2 Star rating from Wrestling Observer Newsletter.

Okada would lose the title to Kenny Omega on June 9 Dominion 6.9 in Osaka-jo Hall in NJPW's first two out of three falls match in 39 years and the first to hold with no time limit. The match received a seven-star rating from Meltzer, which remains the highest rating ever given toward a match. Omega also became the first Canadian wrestler and the fourth wrestler from North America to win the title. Omega would lose the title to Hiroshi Tanahashi on January 4, 2019 at Wrestle Kingdom 13 in Tokyo Dome. Tanahashi would break his record by winning the title for the eight times and becoming the wrestler to cash in the Tokyo Dome IWGP Heavyweight Championship challenge rights certificate at a Wrestle Kingdom event. Tanahashi lost the title to Jay White on February 11 at The New Beginning in Osaka, becoming the first New Zealander-born champion and the first wrestler from Oceania to win the title. In April, heading to the G1 Supercard in the Madison Square Garden, NJPW restored the IWGP Heavyweight Championship. On April 7 at G1 Supercard in New York, United States, Okada defeated White to win the title, marking the first time the title changed hands outside Japan.

Overall, there have been 66 reigns shared among 28 wrestlers. The inaugural champion was Inoki, who defeated Masa Saito on June 12, 1987, in a tournament final. Hiroshi Tanahashi holds the record for most reigns, with eight. At 720 days, Kazuchika Okada's fourth reign is the longest in the title's history. Okada has the most successful defenses in that reign with 12 and with a combined four reigns, also holds the record for most days as champion at 1,516. Kensuke Sasaki's fourth reign holds the record for shortest reign at 16 days. Over his seven reigns, Tanahashi successfully defended the title 28 times, the most of any champion. With zero, Big Van Vader's first and third reigns, Salman Hashimikov's only reign, Riki Choshu's first reign, Tatsumi Fujinami's third and fifth reigns, Masahiro Chono's only reign, Genichiro Tenryu's only reign, Scott Norton's second reign, Hiroyoshi Tenzan's first and third reigns, Kensuke Sasaki's fourth reign, Kazuyuki Fujita's third reign and Manabu Nakanishi's only reign are all tied for least successful defenses.

Tetsuya Naito is the current champion in his second reign, after defeating Kazuchika Okada on January 5, 2020, at NJPW's Wrestle Kingdom 14 event to win the title. 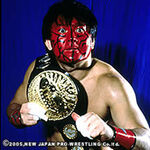 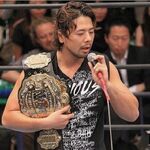 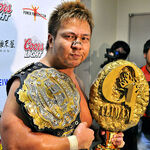 Cite error: <ref> tags exist, but no <references/> tag was found
Retrieved from "https://puroresusystem.fandom.com/wiki/IWGP_Heavyweight_Championship?oldid=50721"
Community content is available under CC-BY-SA unless otherwise noted.