A. ^ Each wrestler's total number of days as champion is ranked highest to lowest; wrestlers with the same number are tied for that certain rank.
B. ^ Guerrera was replaced by Psychosis due to Guerrera being injured. 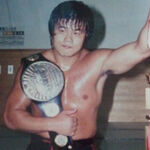