Title changes happen mostly at NJPW-promoted events. The inaugural champions were Shinjiro Otani and Tatsuhito Takaiwa, who defeated Dr. Wagner Jr. and Koji Kanemoto on August 8, 1998, in the finals of a tournament. The Motor City Machine Guns (Alex Shelley and Chris Sabin), a Total Nonstop Action Wrestling (TNA) tag team, defeated then-reigning champions No Limit (Tetsuya Naito and Yujiro) on January 4, 2009, at Wrestle Kingdom III. Their reign lasted until July 5, 2009, when they were defeated by Apollo 55 (Prince Devitt and Ryusuke Taguchi) at a live event. During that time, they had three successful defenses; two were held by TNA due to a pre-existing relationship and an agreement with NJPW. Their first defense in TNA, a rematch against No Limit, occurred on March 31, 2009, at the tapings of their weekly television program TNA Impact!. On April 19, 2009, they made their second, and last, defense in TNA at the Lockdown pay-per-view event in a Three Way Tornado Tag Team Six Sides of Steel cage match against No Limit and The Latin American Xchange (Hernandez and Homicide).

The third design of the belt 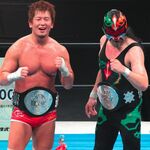 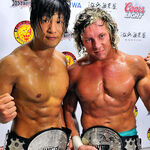 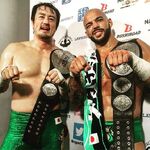 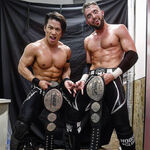