The Independent Junior Heavyweight Championship is a championship that is being defended in various independent promotions in Japan. The title was originally created by Frontier Martial-Arts Wrestling as the FMW Independent World Junior Heavyweight Championship. It stayed with FMW from its creation in 1993 to mid-1999, when FMW dropped the title. Even with the belt being dropped by FMW, the original title belt is still used, which bears the "FMW" name on it. 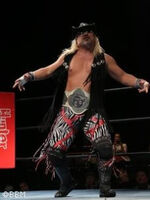