The International Junior Heavyweight Tag Team Championship is a championship formerly contested for in the WAR, and later Dragon Gate and later Tenryu Project. This title was the first tag team championship in Japan dedicated to junior heavyweight wrestlers.

It was created in WAR on February 23, 1996 when Gedo and Lionheart defeated Lance Storm and Yuji Yasuraoka in a tournament final. It was deemed inactive in 2000 when WAR folded, and was later revived by Dragon Gate on August 8, 2006. The I-J belts would be unified with the new Open The Twin Gate Championship, a tag title made specifically for Dragon Gate, on October 12, 2007. In September 2010, the championship was reactivated by Tenryu Project. 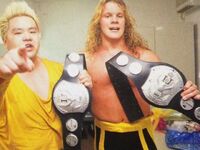 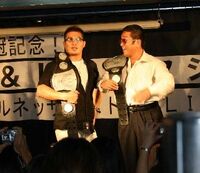 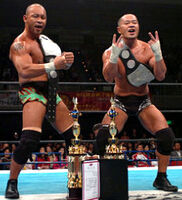 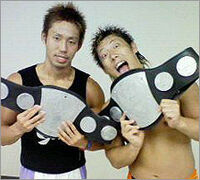 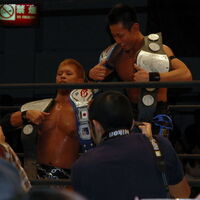 Naruki Doi and Masato Yoshino
Add a photo to this gallery
Retrieved from "https://puroresusystem.fandom.com/wiki/International_Junior_Heavyweight_Tag_Team_Championship?oldid=36555"
Community content is available under CC-BY-SA unless otherwise noted.