The International Princess Championship (インターナショナルプリンセス王座, Intānashonaru Purinsesu Ōza) is a secondary singles championship in the Tokyo Joshi Pro Wrestling promotion. The title is the second active title in Tokyo Joshi Pro and it was introduced on July 16, 2019, and the inaugural champion was crowned on August 25, 2019, when Natsumi Maki defeated Gisele Shaw to become the inaugural champion. 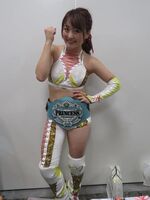