The J-Crown (also known as J-Crown Octuple Unified Championship) was formed originally by New Japan Pro Wrestling as a way of unifying eight junior heavyweight and cruiserweight titles from several different organizations. The J-Crown tournament was held in August 1996.

The J-Crown was the unification of eight different championship belts from five different organizations, including ones from both Japan and Mexico. The tournament to crown the first champions was held over four nights, from August 2 to August 5, 1996, the same New Japan Pro Wrestling's annual G1 Climax event took place, promoting two major tournaments on one tour. Jushin Thunder Liger is credited with coming up with the idea for the J-Crown. The inaugural champion was The Great Sasuke.

Five months later, as the World Wrestling Federation was getting ready to introduce a new Light Heavyweight title, they became aware that the original Light Heavyweight Championship belt was no longer in their possession. (The physical belt had long since been in use in Mexico for the Universal Wrestling Association and in Japan for New Japan Pro Wrestling.) WWF demanded that Shinjiro Otani, the current J-Crown Champion at the time, return the belt to them immediately. He did so on November 5, 1997. On the same day, he also vacated all of the remaining titles, except for the IWGP Junior Heavyweight Championship, effectively ending the J-Crown. 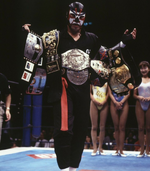