Junction Three was a professional wrestling stable in the Japanese promotion Dragon Gate, June 8, 2011. The group was named Junction Three (JIII) in reference to it being a union between the former members of World-1, Kamikaze and the Veteran-gun. On February 9, 2012, Junction Three was forced to disband, after losing a fourteen-man elimination tag team match to Blood Warriors.

On January 15, 2012 Kid and Yoshino unsucessfuly challenged Akira Tozawa and BxB Hulk for the Open The Twin Gate titles. On January 21 Junction Three was against Blood WARRRIORS in a Loser Leaves Unit Match the person who was pinned and Gamma was forced to leave Junction Three. On February 2 Susumu unsucessfuly challenged CIMA for the Open Dream Gate Championship. After a ten-month rivalry, Blood Warriors defeated Junction Three in a fourteen-man elimination tag team match on February 9, 2012, forcing JIII to disband.[8] 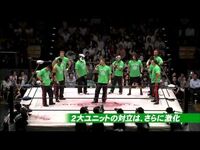 The Original members of Junction Three 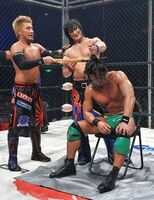 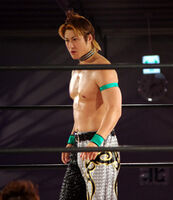 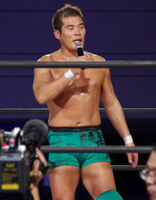 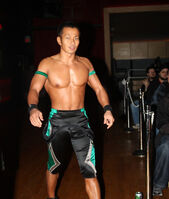 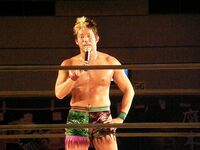 Yoshinopacunitedjunction.jpg|Yoshino and PAC as Open The United Gate Champions

BxB Hulk as the winner of the King of Gate 2011

Community content is available under CC-BY-SA unless otherwise noted.