Kamikaze was one of the face stables in the Japanese promotion Dragon Gate, it was founded on December 19, 2008 by Shingo Takagi, Akira Tozawa and Taku Iwasa. After Takagi returned from an injury, Takagi disbanded KAMIKAZE on May 13, 2011 and the following day joined forces with Masaaki Mochizuki's new stable, Junction Three, to battle CIMA's Blood Warriors. KAMIKAZE also had an American version in Dragon Gate USA named KAMIKAZE USA where they were heel and they feuded with the Chikara wrestlers. KAMIKAZE USA was disbanded when KAMIKAZE in Japan was disbanded.

During Shingo Takagi's membership in Typhoon he caused tension within the faction, and led to Susumu Yokosuka challenged him to a match on November 16, 2008 for the Open the Dream Gate Championship and also after a diet trial series, where Tozawa actually had success Tozawa challenged Open the Triangle Gate Champions Masaaki Mochizuki, Don Fujii, and Magnitude Kishiwada to a title match against him, Taku Iwasa and Kenichiro Arai. The trio agreed, but on the condition that Tozawa-juku would have to disband if his team lost. On November 16 Takagi retained, and then tried to banish Yokosuka from Typhoon as punishment, but Ryo Saito tried to stop him, and then CIMA was called out. Takagi gave him a lariat before he could say anything, resulting in his banishment from Typhoon and Tozawa-juku disbanded in match against Masaaki Mochizuki, Don Fujii and Magnitude Kishiwada and Tozawa and his stablemates were given a graduation ceremony. After that Takagi began teaming with Akira Tozawa and Taku Iwasa they had been members of, Tozawa-juku that had disbanded, with the trio officially forming new faction on December 19. On December 28, Takagi lost the Open the Dream Gate Championship to Naruki Doi, who had won the King of the Gate Tournament. On January 11, 2009, Dragon Kid joined the new faction, with Takagi called the faction KAMIKAZE. On January 25 Kenshin Chikano joined the stable. On February 15 Takagi, Iwasa and Dragon Kid won the Open the Triangle Gate Championship, but lost the championship to CIMA, Gamma and KAGETORA on April 15. When YAMATO left Real Hazard, YAMATO joined KAMIKAZE, reforming his team with Takagi. On July 19 Takagi and YAMATO failed to capture the Open the Twin Gate Championship due to YAMATO being blinded by a protein powder attack from Keni'chiro Arai. The duo won the annual Summer Adventure Tag League Tournament in August, and then the Open the Twin Gate Championship the following month.[1] At the end of October Taku Iwasa semi-retired and left the stable. YAMATO and Takagi held the titles until December 27, when they lost them to CIMA & Gamma. At the end of the year, when the Generation War was going on, the Veteran-gun extended an invite to Dragon Kid to join their ranks. He did not accept nor reject the invitation, which eventually caused his KAMIKAZE stablemates to question where his loyalties lied.

After Akira Tozawa interrupted a Ultra Hurricanrana attempt in a six-man tag match on January 11, 2010, causing them and YAMATO to lose, Kid decided to leave KAMIKAZE and side with CIMA, Gamma Susumu Yokosuka and KAGETORA in the WARRIORS-5 group, and by default the Veteran-gun. Later that month Kenshin Chikano ended his career and left the stable. After KAGETORA was expelled from Real Hazard, Tozawa started to be a mentor to KAGETORA and later it was decided that WARRIORS-5 and KAMIKAZE would face each other the winner would get KAGETORA. On February after Cyber Kong resign with Dragon Gate Takagi called him out after winning a match, and he surprisingly appeared. He appealed to President Okamura to be reinstated, and was welcomed back, joining the stable. On February 27 CIMA, Gamma & Dragon Kid of Warriors-5 faced Tozawa, YAMATO and Takagi and the winning team would get KAGETORA. During the match, KAGETORA was hit by an errant cane attack from Gamma, and took the cane away from Gamma when he attempted to cheat again. The finish of the match occurred when KAGETORA accidentally hit Gamma with his cane, leading to Tozawa pinning Gamma for KAMIKAZE's win. KAGETORA thus joined KAMIKAZE, promising his new stablemates that he would do his best. On March 22, 2010, Takagi and Cyber Kong defeated CIMA and Gamma to regain the Open the Twin Gate Championship and later tht night YAMATO defeated defeated Naruki Doi to become the Open the Dream Gate Champion at Compilation Gate 2010 in Tokyo. In May 2010 Tozawa left Japan for an extended tour of the United States. Takagi, Kagetora, YAMATO and Kong participated in the 2010 King of Gate tournament and Kagetora was eliminated at first round by Dragon Kid, YAMATO was eliminated at first round by Masaaki Mochizuki, Kong was eliminated at first round by BxB Hulk and Takagi defeated Dragon Kid in the finals on April 14, 2010. This allowed him to contest Open the Dream Gate Championship match against his stablemate and champion YAMATO at the Dead or Alive PPV on May 5, 2010, but YAMATO retained the title by making Takagi submit. Takagi and Kong would lose their Twin Gate title to K-ness and Susumu Yokosuka on May 13, 2010. Takagi then renewed his old feud with former tag partner BxB Hulk, leading to a Hair vs Hair match at the Kobe World Pro Wrestling Festival 2010 on July 11. Takagi won the match and shaved off Hulk's hair. Also in that night YAMATO lost the Open the Dream Gate Champion to Masato Yoshino.

In March 2011, Iwasa returned to the ring and rejoined the stable. After Takagi returned from an injury, Takagi disbanded KAMIKAZE on May 13, 2011 and the following day joined forces with Masaaki Mochizuki's new stable, Junction Three, to battle CIMA's Blood Warriors.

On March 27, 2010 SHINGO, YAMATO and Jon Moxley founded the American version of the stable. At Uprising, Akira Tozawa and Gran Akuma were added to the Kamikaze USA stable, while YAMATO teamed again with Takagi to defeat the team of Cima and Dragon Kid. Kamikaze USA would also attack Quackenbush, Jigsaw, Yoshino and Hulk after their matches, leading to Quackenbush challenging YAMATO to a match between Kamikaze USA and the Chikara wrestlers. The match took place at Enter The Dragon 2010, which saw YAMATO, Tozawa, Moxley and Akuma, representing Kamikaze USA, being defeated by Yoshino, Quackenbush, Jigsaw and Hallowicked, ending the feud between Kamikaze USA and the Chikara wrestlers.

On January 28, 2011 at United: NYC YAMATO defeated nemesis BxB Hulk to win the Open The Freedom Gate Championship. At Mercury Rising 2011, Austin Aries challenged YAMATO for his title by putting his own career on the line. YAMATO defeated Aries, who would later renege on his promise to leave the company. Tozawa earned victories over Sami Callihan, Austin Aries and BxB Hulk for Dragon Gate USA in January 2011, but run-ins with stablemates Jon Moxley and Yamato led to him being kicked out of Kamikaze USA, turning him face in the process.[2][3][4][5] At Open the United Gate 2011, YAMATO defeated his former Kamikaze USA stable-mate Akira Tozawa to retain his title. KAMIKAZE USA disbanded when Shingo returned from the injury and joined forces with Masaaki Mochizuki's new stable, Junction Three, to battle CIMA's Blood Warriors. 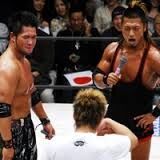 The Original Members of KAMIKAZE 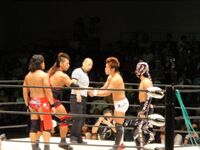 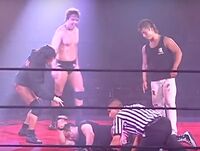 The Original Members of KAMIKAZE USA 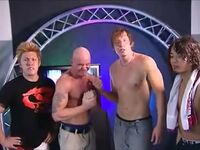 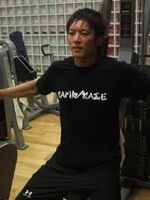 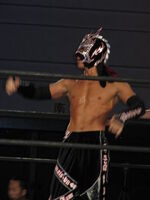 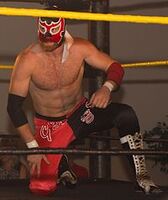 Gran Akuma
Add a photo to this gallery 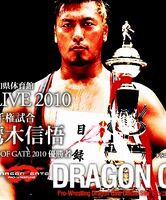 Retrieved from "https://puroresusystem.fandom.com/wiki/KAMIKAZE?oldid=45325"
Community content is available under CC-BY-SA unless otherwise noted.