The KO-D Openweight Championship is the top singles championship in DDT Pro-Wrestling (DDT) promotion. "KO-D" is the acronym of DDT's governing body, the King of DDT. The title was introduced on April 19, 2000, after Masao Orihara defeated Sanshiro Takagi to become the first champion.

The championship has been represented by two different belts. The current second version belt was introduced in January 2005. When the title was first created, all title matches had no time limit established but DDT eventually changed the rule over to a more traditional 60 minute time limit. Since 2009, DDT established the Right to Challenge Anytime, Anywhere, with wrestlers being granted a title shot at anytime and anywhere, with the title defenses being labeled as a "Cash In" match. Otherwise, the usage of the rule was scheduled in advance and is treated as a regular title match.

In April 2000, DDT commissioner Exciting Yoshida announced the creation of DDT's first championship the DDT Openweight championship, as a way to celebrate the promotion's first event in the Korakuen Hall, in December 1999. Since there wasn’t much money in the company at the time, the belt was made as cheaply as possible.

Throughout the history of the championship, the title was vacated twice. The first time was after Nosawa was stripped of the title by the DDT Commissioner for not being appropriate as a champion. The second time was when Dick Togo suffered a tailbone injury. Antonio Honda then became the provisional champion. Togo then defeated Hondo in a unification match to become the undisputed champion. When the title was first created, all title matches had no time limit established but DDT eventually changed the rule over to a more traditional 60 minute time limit.

Overall, there have been 62 reigns shared among 30 wrestlers. Title changes happen at DDT-promoted events. Two non-Japanese wrestlers have held the title. The inaugural champion was Masao Orihara winning the title on April 19, 2000. Over his 9 reigns, HARASHIMA successfully defended the title 28 times, the most of any champion. The youngest champion is Konosuke Takeshita with 22 years old, while also being the only champion with most successful title defenses with 12 title defenses and also the longest reign as champion with 405 days.

In August 2018, Shigehiro Irie defended the title outside of Japan for the first on Dayton, Ohio, United States at Rockstar Pro Wrestling event Amped losing the title to Sami Callihan in a three-way match also involving Trey Miguel, while also becoming the first title change outside of Japan, before regaining it eight days later. On August 28, Meiko Satomura became the first female to become the KO-D Openweight Champion. 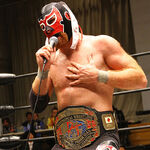