Monster Express was a professional wrestling stable in the Japanese promotion Dragon Gate, it was founded on August 30, 2013 by Akira Tozawa and Shingo Takagi and Uhaa Nation. On October 12, VerserK forced to disband in a 5 vs 4 Loser Revival Captains Fall match.

On August 1, 2013 after Tozawa had led Mad Blankey to victory against -akatsuki- in a match, where the losing stable would have to disband, the rest of Mad Blankey turned on Akira Tozawa, kicking him out of the group and assuming YAMATO their new leader. On August 30, Mad Blankey turned on Uhaa Nation after he refused to wrestle Tozawa. On September 12, Naruki Doi turned on Masato Yoshino, signaling the end of WORLD-1 INTERNATIONAL and Yoshino and Ricochet and Shachihoko Boy formed a stable with Tozawa, Takagi and Nation. On October 6, Tozawa, Yoshino and Takagi failed to capture the Open The Triangle Gate Championship and they revealed the named of the stable . On October 10, Yoshino defeated YAMATO to win the Open The Dream Gate Championship for the second time. On November 3, Anthony Nese began his first tour of Dragon Gate USA's Japanese parent promotion, Dragon Gate and he joined the stable and he unsuccessfully challenged Genki Horiguchi H.A.Gee.Mee!! for the Open The Brave Gate Championship. Four days later Nese left the stable. On December 22, Tozawa and Takagi defeated Naruki Doi and Yamato to win the Open The Twin Gate Championship.

On March 2, 2014, Yoshino dropped the Open the Dream Gate Championship to stablemate Ricochet.[1] On July 20 Takagi and Tozawa lost the titles to Millennials (Eita and T-Hawk). On April 4 Ricochet won the Open The Freedom Gate Championship by deafeating Johnny Gargano. On May 5, 2014 Ricochet lost the Open the Dream Gate Championship to YAMATO. On May 30 Ricochet took part of the NJPW's 2014 Best of the Super Juniors tournament,[2] advancing to the semifinals, after finishing second in his block with a record of five wins and two losses.[3] On June 8, Ricochet first defeated Ryusuke Taguchi in the semifinals and then Kushida in the finals to win the 2014 Best of the Super Juniors and become the number one contender to the IWGP Junior Heavyweight Championship.[4] With his win, Ricochet became the youngest person to win the tournament and the second American to do so.[5][6] On June 21 at the NJPW's Dominion 6.21, Ricochet unsuccessfully challenged Kota Ibushi for the IWGP Junior Heavyweight Championship.[7][8] On July 20, Ricochet and Matt Sydal unsuccessfully challenged Naruki Doi and YAMATO for the Open the Twin Gate Championship.[9] and Ricochet left the stable after that night to foucus on his tag team with Matt Sydal.

On March 6, 2016 T-Hawk and Shimizu defeated Doi and YAMATO to win the Open the Twin Gate Championship. On April 3 Yoshino was stripped of the Open the Owarai Gate Champion due to failure to defend it within the previous three months. On May 8 to June 12 Tozawa, T-Hawk, Yoshino and Shimizu participated at the 2016 King of Gate Tozawa at block B, T-Hawk at block C and Yoshino and Shimizu at block D, Tozawa finished his block with 7 points and then he defeated Eita in a playoff match to advanced to the semifinals and Tozawa lost to Yamato. T-Hawk finished his block with 6 points and T-Hawk failed to advanced to the finals due to losing to Masaaki Mochizuki. Yoshino failed to advanced to the finals finishing block D with 7 points and Shimizu with 8 points advancing to the semifinals. At the semifinals Shimizu defeated a former Dia.Hearts stablemate Masaaki Mochizuki to advanced to the finals but Shimizu lost to YAMATO at the finals. On June 19 Shimizu and T-Hawk lost the Twin Gate Championship to Jimmyz (Jimmy Susumu and Jimmy Kagetora). On August 6 to August 27 Tozawa, Shimizu and Yoshino and T-Hawk participated at the 2016 Summer Adventure Tag League Tozawa, Shimizu finished block B with 6 points and Yoshino and T-Hawk finished block A with 6 points.

On September 4 Tozawa, Yoshino and T-Hawk lost the Open the Triangle Gate Champions to Jimmyz (Ryo "Jimmy" Saito, Jimmy Kanda and Genki Horiguchi H.A.Gee.Mee!!). On September 22 after Yoshino, Shimizu, Peter Kaasa and T-Hawk lost to CIMA and Dragon Kid, Masaaki Mochizuki and Flamita, after the match T-Hawk insulted his stablemates and challenged Yoshino for the leadership of . On September 22 during the Loser Leaves Unit match between Masato Yoshino and T-Hawk VerserK interfered in the match and the match ended in no contest and T-Hawk turned on Yoshino and joined VerserK and also Tozawa announced his plans to leave Dragon Gate to WWE and his last match would be on November 3 at the Gate of Destiny 2016. On September 29 Peter Kaasa officially joined the stable. On October 12, MONSTER EXPRESS were forced to disband after losing to VerserK in a 5 vs 4 Loser Revival Captains Fall match.

The original members of MONSTER EXPRESS. 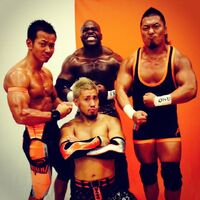 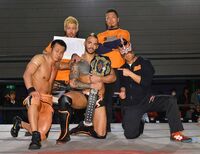 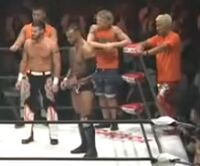 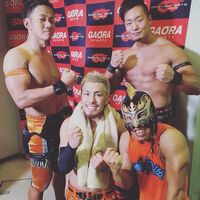 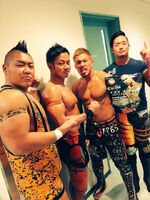 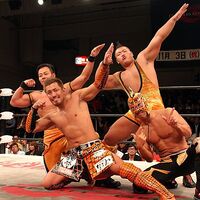 The last members of MONSTER EXPRESS after T-Hawk's betrayal.
Add a photo to this gallery 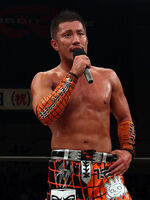 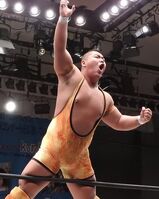 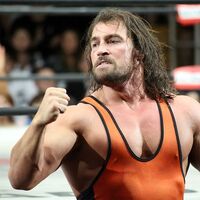 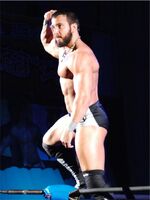 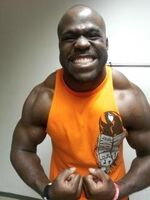 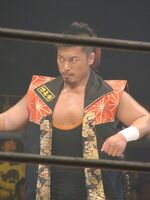 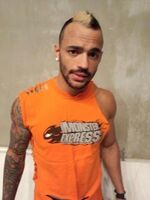 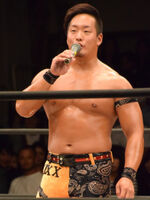 T-Hawk
Add a photo to this gallery

T-hawkbigrshimizu.jpg|T-Hawk and Big R Shimizu as the Open The Twin Gate Champions

Retrieved from "https://puroresusystem.fandom.com/wiki/MONSTER_EXPRESS?oldid=31581"
Community content is available under CC-BY-SA unless otherwise noted.