In June 2018, Masaaki Mochizuki lost the Open The Dream Gate Championship, afterwards Mochizuki made his intentions of training the new generation and announced that he and Shun Skywalker would take part of All Japan Pro Wrestling's Jr. Tag Battle of Glory with the purpose of Shun gaining experience. Hyou Watanabe and Yuki Yoshioka would try to convince Mochizuki to form a unit with them, but Mochizuki was sceptical, but agreed to handicap match against them and if they won he would form a unit with them. On August 7, Mochizuki was defeated by Watanabe, Skywalker and Yoshioka in a three-on-one handicap match. After the match 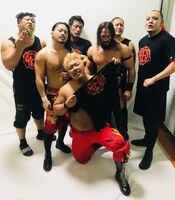 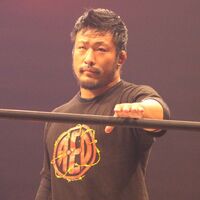 Yuki Yoshioka
Add a photo to this gallery
Retrieved from "https://puroresusystem.fandom.com/wiki/Mochizuki_Dojo?oldid=41284"
Community content is available under CC-BY-SA unless otherwise noted.