The NEVER Openweight Championship (NEVER無差別級王座, NEVER Musabetsu-kyū Ōza) is a tertiary singles championship in the New Japan Pro Wrestling (NJPW) promotion. NEVER is an acronym of the terms "New Blood", "Evolution", "Valiantly", "Eternal", and "Radical" and was a NJPW-promoted series of events, which featured younger up-and-coming talent and outside wrestlers not signed to the promotion. The project was officially announced on July 12, 2010, and held its first event on August 24, 2010. On October 5, 2012, NJPW announced that NEVER was going to get its own championship, the NEVER Openweight Championship, the promotion's sixth active title.

The title was originally scheduled to be defended exclusively at NEVER events, but this plan was quickly changed and since its foundation, the title has been defended on the undercards of NJPW events. The original concept of having younger workers wrestle for the title has also not been realized with all six holders of the title having been in their thirties or forties. Instead, through the likes of Katsuyori Shibata, Togi Makabe, and Tomohiro Ishii, the NEVER Openweight Championship became known for its "gritty" title matches. Though named an "openweight" championship, NJPW has also categorized the title as one of the promotion's four heavyweight titles, alongside the IWGP Heavyweight Championship, the IWGP Intercontinental Championship and the IWGP Tag Team Championship. Together, the NEVER Openweight, IWGP Heavyweight and IWGP Intercontinental Championships also form what has been called the "New Japan Triple Crown" (新日本トリプルクラウン, Shin Nihon Toripuru Kuraun).

On October 5, 2012, over two years after the founding of NEVER, New Japan Pro Wrestling announced the creation of the project's first championship, the NEVER Openweight Championship. The title was originally created with the idea of using it to "elevate younger wrestlers". The first champion was to be determined in a sixteen-man single-elimination tournament, which was set to take place November 15 and 19, 2012. The title and the tournament were announced by New Japan president Naoki Sugabayashi and NEVER regular Tetsuya Naito, who was scheduled to enter the tournament, but was forced to pull out after suffering a knee injury. Much like regular NEVER events, the tournament also featured wrestlers not signed to New Japan; freelancer Daisuke Sasaki; Hiro Tonai, Kengo Mashimo, Ryuichi Sekine, Shiori Asahi and Taishi Takizawa from Kaientai Dojo, and Masato Tanaka from Pro Wrestling Zero1. The entire first round of the tournament took place on November 15 and saw Shiori Asahi, Yoshi-Hashi, Taishi Takizawa, Ryusuke Taguchi, Tomohiro Ishii, Kengo Mashimo, Karl Anderson and Masato Tanaka advance. The rest of the tournament took place four days later. During the second round, Kengo Mashimo defeated Ryusuke Taguchi, Karl Anderson defeated Shiori Asahi, Masato Tanaka defeated Taishi Takizawa, Tomohiro Ishii defeated Yoshi-Hashi. The semifinals saw Anderson defeat Mashimo and Tanaka defeat Ishii. In the finals of the tournament, Tanaka, the 39-year-old, who, despite officially being affiliated with Pro Wrestling ZERO1, had worked for NJPW regularly since August 2009, defeated Anderson to become the inaugural NEVER Openweight Champion. Though the title was originally designed to be defended at NEVER events, NJPW has not held a single NEVER event since the championship tournament. 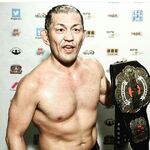