In 1981 champion Chavo Guerrero Sr. left NJPW to go back to the United States, only to come back to Japan under the banner of All Japan Pro Wrestling, where it was renamed the International Junior Heavyweight Championship to avoid confusion and (along with being given a new belt design) in general line with AJPW's NWA titles. The championship became the cornerstone of AJPW's junior heavyweight division until its eventual replacement by the World Junior Heavyweight Championship, which kept the belt design until 2017.[1]

In March 2007, after over two decades of inactivity, Toryumon Mexico reactivated the championship, using the belt that was used prior to November 1982. 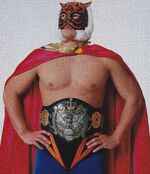 Cite error: <ref> tags exist, but no <references/> tag was found
Retrieved from "https://puroresusystem.fandom.com/wiki/NWA_International_Junior_Heavyweight_Championship?oldid=31480"
Community content is available under CC-BY-SA unless otherwise noted.