The NWA World Welterweight Championship is a championship governed by the National Wrestling Alliance. The belt was generally contested by wrestlers who weighed between 70 kilograms (150 lbs.) and 78 kilograms (170 lbs.), although this would not always be strictly enforced. It was first awarded on March 15, 1946 to El Santo, who won an eight-man tournament in Empresa Mexicana de Lucha Libre (EMLL).

The belt became an officially sanctioned NWA championship when EMLL joined the NWA in 1952. This would last until the late 1980s when EMLL withdrew from the NWA and changed its name to Consejo Mundial de Lucha Libre (CMLL). On August 3, 1996, New Japan Pro Wrestling would take control of the belt and two days later combine it with seven other championships to form the J-Crown Championship, then held by Great Sasuke. The J-Crown would end on October 5, 1997 as championships would be withdrawn or vacated primarily due to the World Wrestling Federation demanding the return of their Light Heavyweight Championship.

Ultimo Dragon would reintroduce the championship as the main singles title in his Toryumon promotions beginning February 6, 1999 with Dragon Kid defeating Dr. Cerebro in a decision match, though the match initially ended in a double count-out and had to be restarted. The championship would remain in possession of the Toryumon promotions even after the split with Dragon Gate in 2004 until November 27, 2007 when La Sombra defeated Hajime Ohara and brought it back under control of CMLL. It would later be returned to the NWA on August 12, 2010. 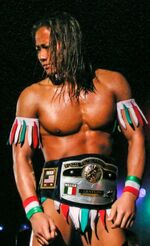 YOSSINO
Retrieved from "https://puroresusystem.fandom.com/wiki/NWA_World_Welterweight_Championship?oldid=48080"
Community content is available under CC-BY-SA unless otherwise noted.