Start a Wiki
Natural Vibes (ナチュラル・ヴァイブス, Nachuraru Vaibusu), was a professional wrestling stable in the Japanese promotion Dragon Gate formed on April 6, 2018, by "brother" YASSHI, Genki Horiguchi, Kzy, Punch Tominaga and Susumu Yokosuka and revealed their name on May 3. The stable was formed had gone on to primary feud with ANTIAS over the Open The Twin and Open The Brave Gate Championships.

Natural Vibes elaborated their own entrances, which included dancing through the crowd and dance sequences in the ring, and whenever usually Kzy or sometimes YASSHI would be around both of them started raping during their theme song.

Shortly after the Jimmyz disbanded, Genki Horiguchi and Susumu Yokosuka (who both failed to win their championship opportunities for the Open The Brave and Dream Gate Championships, respectively) formed a team since the two were part of Jimmyz. During this time, Punch Tominaga was kicked out of VerserK (who later renamed to ANTIAS).

In January 2018, ANTIAS made numerous attempts to make Kzy join ANTIAS even saying that they would help him defeat Masaaki Mochizuki in his Open The Dream Gate Championship match, leading Kzy to refuse on January 27. On February 7, Kzy unsuccessfully challenged Mochizuki for the Open The Dream Gate Championship. After the match Kzy left Tribe Vanguard, leading ANTIAS to come out and again offering Kzy to join ANTIAS. However, Kzy refused to join ANTIAS, which led ANTIAS attacking him until Susumu Yokosuka and Genki Horiguchi made the save and allying themselves with Kzy.

Following this, Kzy, Horiguchi, and Yokosuka agreed to face ANTIAS (Eita, T-Hawk, and El Lindaman) on March 6. Also starting from January, Tominaga stated feuding with former VerserK stablemates Yasushi Kanda and Shingo Takagi, leading Tominaga defeating Kanda to win the Open The Brave Gate Championship. In the following weeks, Kzy warned ANTIAS that someone also coming for them. On March 4 at Champion Gate in Osaka, Horiguchi and Yokosuka unsuccessfully challenged Eita and T-Hawk for the Open The Twin Gate Championship, after Eita and T-Hawk cheated to win the match. On March 6, Kzy, Horiguchi, and Yokosuka lost to Eita, T-Hawk, and Lindaman. After the match, ANTIAS kept attacking them, until Tominaga came out and made the save, leading Kzy revealing that "brother" YASSHI, who was a member of VerserK but left out of the stable after it was renamed to ANTIAS, was also coming for them. Then Kzy, Horiguchi, Tominaga, YASSHI and Yokosuka agreed to a match against ANTIAS (Takagi, Kanda, Lindaman, Eita, and T-Hawk) which was made official on April 6. In weeks leading to the match, Kzy and Horiguchi unsuccessfully challenged Eita and T-Hawk for the Open The Twin Gate Championship, while Tominaga was stripped of the Open The Brave Gate Championship after a title defense against Kanda ended in a no contest.

On April 6 after Kzy, Horiguchi, Tominaga, YASSHI and Yokosuka defeated ANTIAS, Kzy announced the formation of a new stable with Horiguchi and Yokosuka, with him being the center of the group, assuming the leadership. Kzy would then ask Tominaga and YASSHI to join them, which they accepted. Kzy would then challenge MaxiMuM into a title match for their Open The Triangle Gate Championship at Dead or Alive on May 6, which MaxiMuM accepted. On May 3, Kzy unveiled that unit would be named "Natural Vibes". Shortly after, they started elaborating their own entrances, which include dancing through the crowd and dance sequences in the ring, and whenever Kzy or YASSHI are around both of them started rapping during their theme song.

The unit's official match took place at Dead or Alive on May 6, where Kzy, Horiguchi, and Yokosuka defeated MaxiMuM (Naruki Doi, Masato Yoshino, and Jason Lee) to win the Open The Triangle Gate Championship. Following the Dead or Alive, four members of Natural Vibes took part in the King of Gate with Kzy, Horiguchi, Tominaga and Yokosuka, wrestling in separate round-robin blocks. Yokosuka entered his last round-robin matches with a chance to advance to the semifinals but was eliminated after losing to Kagetora. In the end, Kzy and Tominaga finished the tournament with a record of two wins, one loss,and one draw, while Yokosuka and Horiguchi finishing the tournament with a record of two wins and two losses. On July 22 at Kobe Pro-Wrestling Festival, Susumu, Horiguchi, and Kzy successfully defended the Open the Triangle Championship against ANTIAS (Takashi Yoshida, Yasushi Kanda, and Masato Tanaka). On November 18, Kzy, Horiguchi and Yokosuka made their record-breaking 6th defense of the Open The Triangle Gate Championship against Ryo Saito, Don Fuji,i and Gamma. On December 23 at Final Gate, Kzy, Horiguchi and Yokosuka lost their titles to R.E.D (Kazma Sakamoto, Takashi Yoshida, and Yasushi Kanda.

In February 2019, Natural Vibes started a feud with all the stables in Dragon Gate, except MaxiMuM, agreeing to a match on March 7. At the event on March 7, Natural Vibes failed to win the four-way eight-man tag team elimination match. General Manager Takayuki Yagi capitalized on the opportunity and announced the rules for the Steel Cage Survival match, as well as multiple tag team matches between members of the respective units to decide, which member would enter in the match. Leading to the event, Kzy and YASSHI defeated Yokosuka and Horiguchi, with Kzy pinning Horiguchi to represent Natural Vibes in the match. On March 21 at Memorial Gate in Wakayama, Yokosuka defeated Dragon Kid to win Open the Brave Gate Championship. On May 6 at Dead or Alive, Kzy escaped the "Bonds" steel cage survival five-way match. After the match, Kzy decided that no one would be no one kicked out of the stable. Later that month, Kzy, Tominaga, Yokosuka, and Horiguchi took part in the 2019 King of Gate, wrestling in separate round-robin blocks except for Kzy and Tominaga, who wrestled in block A. Kzy was the only member of Natural Vibes to advance from his block, while Tominaga finished in the last place, Yokosuka finished second and Horiguchi finished fourth place. On June 6, Kzy defeated Kazma Sakamoto to advance to the semifinals. Later that night, Kzy was defeated by Ben-K in the semifinals.

At the end of June, Yokosuka and Flamita faced each other in multiple tag team matches, with Flamita pinning Yokosuka each time. On June 29, after being beaten by Flamita for the third time, Yokosuka challenged him to a match for his Open The Brave Gate Championship with General Manager Takayuki Yagi announcing the title match for the event. On July 21, at Kobe Pro-Wrestling Festival, Yokosuka defended the Open The Brave Gate Championship against Flamita. He lost the title to Kaito Ishida on November 4 at Gate of Destiny. On December 15 at Final Gate, Kzy, Horiguchi, and Yokosuka unsuccessfully challenged Strong Machines (Strong Machine J, Strong Machine F, and Strong Machine G) for the Open The Triangle Gate Championship in a three-way match, in which was won by R.E.D (Takashi Yoshida, H.Y.O, and Diamante). Three days later, Kzy suspended the stable after he joined YAMATO to form the Dragon Gate stable in order to unite all Dragon Gate generation of wrestlers against Toryumon and R.E.D in a "Generation War". Meanwhile, the rest of the stable joined the Toryumon stable due to Último Drágon being his mentor. 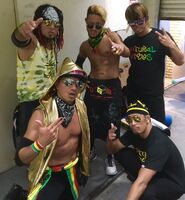 The original members of Natural Vibes

Susumu Yokosuka
Add a photo to this gallery

Tominaga as Open The Brave Gate Champion during his reign 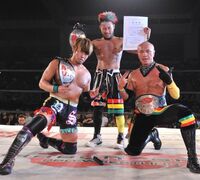 Kzy, Horiguchi, and Yokosuka as Open The Triangle Gate Champions 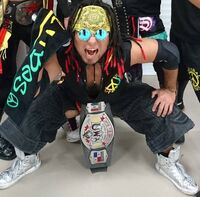 Susumu Yokosuka as the Open The Brave Gate Champion
Add a photo to this gallery
Retrieved from "https://puroresusystem.fandom.com/wiki/Natural_Vibes?oldid=50017"
Community content is available under CC-BY-SA unless otherwise noted.