Over Generation (オーバー・ジェネレーション, Ōbā jenerēshon) or OG was a professional wrestling stable in the Japanese promotion Dragon Gate. It was formed on October 8, 2015 by CIMA, Eita, Gamma, El Lindaman, Punch Tominaga, and rookies Kaito Ishida and Takehiro Yamamura. On April 7, all group invited Dragon Kid to join the stable and Kid joined the stable and formed a team with Eita. Later in 2016 and 2017 Lindaman and Tominaga left OG to join VerserK. This led to a headhunting match where OG won and choose Mondai Ryu as the new member. Following the Dragon Gate restructure on May 7, 2018, CIMA and Yamamura left the stable. On July 5, 2018 Over Generation was forced to disband after losing to ANTIAS in a Losing Unit Disbands Naniwa Elimination Rules Match.

On September 23 Eita was kicked out of VerserK. On October 4 Punch Tominaga turned on Shingo Takagi. On October 8 during the Open Triangle Gate Championship match all members of VerserK tried to help Kotoka and Cyber Kong and Takagi but Punch Tominaga helped CIMA and Gamma allowed them to win but after the match they attack them but Eita made the save and he was joined by his former Millennials stablemate El Lindaman and two rookies Kaito Ishida and Takehiro Yamamura formed a new stable to the sake of destroy VerserK but Don Fujii refused to join them.

On April 7, the all group invited Dragon Kid to join the stable and Kid joined the stable and formed a team with Eita and also challenged Big R Shimizu and T-Hawk for the Open the Twin Gate Championship. On April 10 Cima defeated "Hollywood" Stalker Ichikawa to win the Open The Owarai Gate Championship but after the match, Cima did not want the title and Ichikawa was awarded the championship. On May 5 Kid and Eita failed to capture the Open The Twin Gate Champions losing to Big R Shimizu and T-Hawk. On May 8 to June 12 Eita, CIMA, Gamma, Lindaman and Tominaga participated at the 2016 King of Gate separately, where Tominaga finished block A with only 2 points, CIMA with 6 points and Eita with 7 points and Eita had a playoff match against Akira Tozawa to see who was going to the semifinals and Eita lost and Lindaman finished block D with 1 point and Gamma with 1 point. At the end of the King of Gate Over Generation was joined by Peter Kaasa, who alongside CIMA, Kid challenged Akira Tozawa, T-Hawk and Masato Yoshino for the Open the Triangle Gate Champions and Yoshino accepted and it was announced that Eita as an award was going to participate at the NJPW's Super J-Cup. On July 20, Eita was eliminated from the Super J-Cup in the first round by Jushin Thunder Liger. On July 24 Eita defeated Yosuke Santa Maria to win the Open the Brave Gate Championship. Later that night Peter Kaasa, Kid and CIMA unsuccessfully challenged Masato Yoshino, Akira Tozawa and T-Hawk for the Open the Triangle Gate Championship. Afterwards CIMA announced that Kaasa would be part of the stable any longer, ending their association. On August 6 during the Summer Adventure Tag League Lindaman left the stable due to join Tribe Vanguard. At the end of the Summer Adventure Tag League Yamamura and Ishida finished block A with only 2 points and CIMA, Gamma and Kid, Eita both pass their block Kid, Eita with 8 points and CIMA, Gamma with 7 points advancing to semifinals. At the semifinals Kid and Eita defeated Jimmyz (Jimmy Kagetora and Jimmy Susumu) to advanced to the finals. Meanwhile, CIMA and Gamma failed to advance to the finals losing to Naruki Doi and "brother" YASSHI. At the finals, Kid and Eita defeated Doi and YASSHI to win the Summer Adventure Tag League. On September 22 Eita successfully defended the Open the Brave Gate Champion against "brother" YASSHI after the match Lindaman attacked Eita and the two were involved in a discussion where Punch Tominaga came in and it was agreed between him and Lindaman that the winner of their match would be against Eita for the Open the Brave Gate Champion. On October 12 Eita successfully defended the successfully defended the Open the Brave Gate Champion against El Lindaman. After the match, Eita nominated Flamita his next challenger for the title. On November 3 Eita successfully defended the Open the Brave Gate Championship against Flamita. Later that night, Kid and CIMA defeated Jimmy Kagetora and Jimmy Susumu for the Open The Twin Gate Championship.

On January 18, 2017 Tominaga, Eita and Yamamura participated in the New Years Unit War 6 Man Tag Team Tournament were they lost to Masato Yoshino, Ben-K and Kotoka after that Eita and Tominaga started to feud which other, which led to a match on February 19. On February 12 Tominaga rejoined VerserK after turning on Yamamura in a match against VerserK. On March 4 Eita faced El Lindaman for the Open The Brave Gate Championship. The match ended in a no contest due to Punch Tominaga and Mondai Ryu and Yamamura (who was trying to save from the attack of VerserK) interference. Due to this the Open The Brave Gate Championship was vacated and Eita and Yamamura were announced to take part in the tournament to crown the new champion. On March 8 CIMA, Eita, Kid, Yamamura and Naruki Doi defeated VerserK (Shingo Takagi, T-Hawk, Cyber Kong, El Lindaman and Punch Tominaga) in a Unit Headhunting Match after Yamamura pinned Tominaga after hitting him with Stardust Press. Because of the stipulation of the match, CIMA chose Mondai Ryu as the new member of OG. In May Eita, Kid, CIMA and Yamamura took part of the King of Gate separately. Eita and Kid were on Block A with Eita finishing the tournament with 7 points advancing to the semifinals and Kid with 6 points. Yamamura and CIMA were on Block C with Yamamura finishing the tournament with 3 points and CIMA with 6 points failing to advance to the semifinals due to his final match with Takashi Yoshida ending in a double count out. On June 10 Eita failed to get in the finals of the King of Gate losing to T-Hawk. On November 8 Eita turned on Dragon Kid and rejoined VerserK revealing he was their newest member. On November 19 CIMA defeated "Hollywood" Stalker Ichikawa to win the Open The Owarai Gate Championship. He would vacate the title on November 26 due to personal reasons. On December 5 CIMA and Kid were forced to relinquish the titles after CIMA lost a Six-Man Tag Team match, where as per the stipulation, he had to relinquish the titles since Kid was injured. Kid would later return from the injury and on April 6 Kid defeated Kagetora in a tournament final to win the Open the Brave Gate Championship. On May 7, following the Dragon Gate restructure, CIMA became the president of Dragon Gate and left Over Generation alongside Yamamura to work for Oriental Wrestling in China which CIMA owns. This led OG with only four members. On July 5, Over Generation was forced to disband after losing to ANTIAS in a Losing Unit Disbands Naniwa Elimination Rules Match.

At the start of their matches, they seeked out a child from the crowd to ring the first bell. 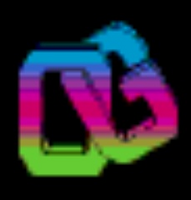 The original members of Over Generation 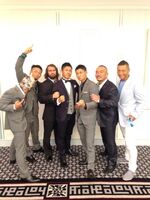 Over Generation with Peter Kaasa 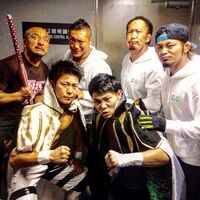 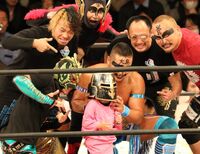 Over Generation with a kid from the crowd 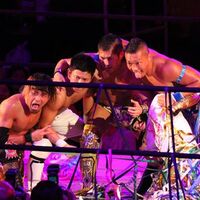 Over Generation with Naruki Doi 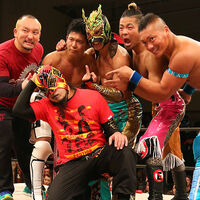 Over Generation after Eita's betrayal 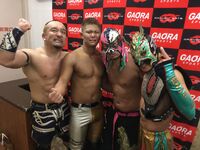 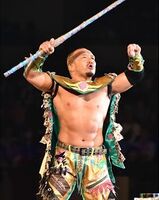 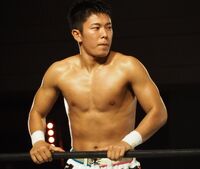 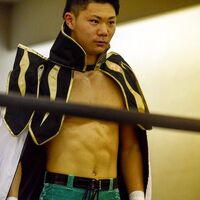 Mondai Ryu
Add a photo to this gallery

Dkbrave2.jpg|Dragon Kid as the Open The Brave Gate Champion in his Over Generation reign 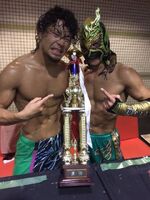 Retrieved from "https://puroresusystem.fandom.com/wiki/Over_Generation?oldid=38732"
Community content is available under CC-BY-SA unless otherwise noted.