Pos.HEARTS was a professional wrestling stable in the Japanese promotion Dragon Gate, March 28, 2005, by Anthony W. Mori, BxB Hulk, Super Shisa and Magnum Tokyo. The Pos. stood for Possible. On February 23, 2007, Hulk, Mori. and Shisa unsuccessfully challenged Muscle Outlaw'z (Gamma, Masato Yoshino. and Naruki Doi) for the Open the Triangle Gate Championship and as a result Pos.HEARTS was forced to disband.

After The Italian Connection disbanding and some time after, Anthony W. Mori approached Magnum Tokyo with the idea to form Pos.HEARTS. The stable was formed, with Super Shisa and a then-rookie BxB Hulk as the other members. Though Mori was the leader of the stable, the stable's main purpose was to launch BxB Hulk's career. In 2005 All membres of Pos.HEARTS participated in the first King of Gate Tournament but Mori was forced to pulled out of the tournament due to injury and Shisa lost in the round of 16 to Shingo Takagi and Hulk lost in the quarterfinals to Takagi and Tokyo lost to Masaaki Mochizuki in the round of 32. In December 2006 Mori participated in the second King of Gate but he lost in the 1st round to Dick Togo. On December 26, 2006. Hulk, Mori and Shisa won the Open the Triangle Gate Championship by defeating Muscle Outlaw'z (Gamma, Masato Yoshino. and Naruki Doi).

In 2006, Magnum would betray Mori, causing Pos.HEARTS to go on hiatus for a while. Mori graduated from Tozawa-juku in January 2007, and he continued to focus on Pos.HEARTS. On January 21, 2007. Hulk, Mori and Shisa lost the titles back to Muscle Outlaw'z (Gamma, Masato Yoshino. and Naruki Doi). Mori soon became heavily pursued by the cram school stable Tozawa-juku with offers to join them. Mori initially refused all of the offers, but he would slowly come around to the idea, and in July he admitted that he was not enough of a man and thus would join the school to gain polish. He reverted to his real name during his tenure with Tozawa-juku. On February 23, 2007. Pos.HEARTS disbanded when Hulk, Mori and Shisa unsuccessfully challenged Muscle Outlaw'z (Gamma, Masato Yoshino. and Naruki Doi) for the Open the Triangle Gate Championship. In 2010 Pos.HEARTS reunited but they lost WARRIORS (Genki Horiguchi and Ryo Saito) and NOSAWA Rongai. 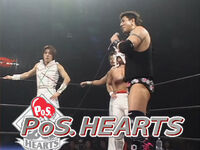 The members of Pos.HEARTS
Add a photo to this gallery

Magnum TOKYO
Add a photo to this gallery 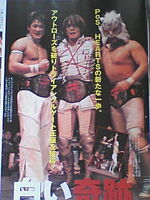 Retrieved from "https://puroresusystem.fandom.com/wiki/Pos.HEARTS?oldid=18754"
Community content is available under CC-BY-SA unless otherwise noted.