Power Struggle (2018) was a professional wrestling event promoted by New Japan Pro-Wrestling (NJPW). The event took place on November 3, 2018, in Osaka, Osaka, at the Edion Arena Osaka. It was the eighth event under the Power Struggle name. The event was headlined by Chris Jericho defending the IWGP Intercontinental Championship against EVIL.

Power Struggle was headlined by Chris Jericho making his first defense of the IWGP Intercontinental Championship against EVIL. The match was set up during the Dominion 6.9 in Osaka-jo Hall. On June 9 at Dominion 6.9 in Osaka-jo Hall, Jericho defeated Tetsuya Naito to win the IWGP Intercontinental Championship. After the match, Jericho attacked Naito until his Los Ingobernables de Japon stablemate EVIL made the save. On October 8 at King of Pro-Wrestling, Jericho returned to the promotion, attacking EVIL during his entrance, where he was disguised as one of the druids, leading to a match against Zack Sabre Jr., being ruled as a no contest. The following day, NJPW made the match official. EVIL made intentions of renewing the IWGP Intercontinental Championship belt, from a white strap to a black strap and if he defeats Jericho, he would give an opportunity to either Tetsuya Naito or Zack Sabre Jr.

On October 8 at King of Pro-Wrestling, Taichi and Goto faced off in a six-man tag team match, where Taichi teamed with his Suzuki-gun stablemates Minoru Suzuki and Takashi Iizuka and Opsreay teamed with his CHAOS stablemates Will Ospreay and Tomohiro Ishii. Ospreay scored the victory for his team by scoring a direct pinfall over Taichi. Following the match, Ospreay grabbed the NEVER Openweight Championship and made his intentions on being the next challenger for the title. Ospreay and Taichi were pulled from the Road to Power Struggle tour, due to Ospreay suffering a rib injury and Taichi due to because of Ospreay's absence, but the match would later be cancelled, due to his injury. On October 27, during the Road to Power Struggle tour, Goto challenged Taichi to rematch, but Taichi refused it. Despite refusing, Goto insisted that he would defeat him for Ospreay. Two days later, NJPW made the title match official.

Power Struggle also featured a singles match between Tetsuya Naito and Zack Sabre Jr. On March 11, 2018, Sabre defeated Naito in the first round in the New Japan Cup. Sabre went on to win the rest of the tournament. Sabre would defeat Naito in a second match during the 2018 G1 Climax, preventing Naito from reaching the finals of the tournament. On October 8 at King of Pro-Wrestling, Sabre was scheduled to face Naito's Los Ingobernables de Japon stablemate EVIL, but the match was declared a no contest, after he was attacked by Chris Jericho. Despite EVIL being unable to compete, Sabre attacked EVIL anyway, leading to Naito to make the save. The following day, NJPW made the match official. Naito had previously been interested in facing Sabre due to losing to him twice. 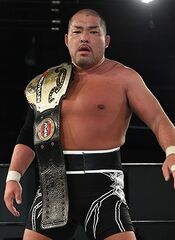 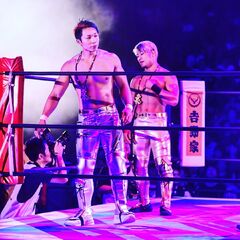 The event also featured the finals of the 2018 Super Jr. Tag League. The tournament matches will take place during the Road to Power Struggle tour between October 16 until November 1. From October 16 until November 1, Roppongi 3K (Sho and Yoh), Suzuki-gun (El Desperado and Yoshinobu Kanemaru) and Los Ingobernables de Japon (BUSHI and Shingo Takagi) took part in the Super Jr. Tag League. Both L.I.J and Suzuki-gun finished the tournament with a record of five wins and two losses, after Suzuki-gun defeated BUSHI and Takagi in their head-to-head match. On November 1, Sho and Yoh defeated Chris Sabin and KUSHIDA in their last round robin match, making a three-way match between the three teams. Following the match, L.I.J and Suzuki-gun came to the ring, and the three teams promised to win the match.

IWGP Heavyweight Champion Kenny Omega and his number one contender Hiroshi Tanahashi, who were set to headline Wrestle Kingdom 13 in Tokyo Dome, met at Power Struggle in a tag team match, where Omega teamed with Kota Ibushi, while Tanahashi teamed with David Finlay.

Retrieved from "https://puroresusystem.fandom.com/wiki/Power_Struggle_(2018)?oldid=48819"
Community content is available under CC-BY-SA unless otherwise noted.