The tournament to crown the inaugural Tokyo Princess Of Princess Tag Team Champions takes place between September 30 and December 2. The title was first revealed on August 26, 2017. Four days later, the title was officially announced in a press conference with the teams taking part of the tournament were also announced. On July 16, 2019, Tokyo Joshi Pro Wrestling announced, via their Twitter account, that they would drop the name Tokyo of the title. 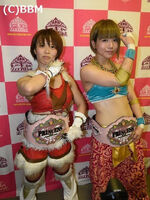 Reika Saiki and Marika Kobashi
Add a photo to this gallery
Retrieved from "https://puroresusystem.fandom.com/wiki/Princess_Tag_Team_Championship?oldid=50480"
Community content is available under CC-BY-SA unless otherwise noted.