The Princess Of Princess Championship (プリンセス・オブ・プリンセス王座, Purinsesu Obu Purinsesu Ōza) is a women's professional wrestling championship owned by the Tokyo Joshi Pro Wrestling promotion. The title is the top title in Tokyo Joshi Pro and it was introduced on October 12, 2015, and the inaugural champion was crowned on January 4, 2016, when Miyu Yamashita defeated Shoko Nakajima to become the inaugural champion.

On October 12, 2015 Tokyo Joshi Pro Wrestling announced that they were going to have their first championship, with the inaugural champion being crowned at the Korakuen Hall on January 4, 2016. It was also announced that it was going to have two battle royals with the winners moving to a decision match on January 4, 2016 to crown inaugural champion. On January 3 the name of the title was revealed to be Tokyo Princess Of Princess Championship (TOKYOプリンセス・オブ・プリンセス王座, Tōkyō Purinsesu Obu Purinsesu Ōza). The following day Miyu Yamashita defeated Shoko Nakajima to become the inaugural champion. On July 16, 2019, Tokyo Joshi Pro Wrestling announced, via their Twitter account, that they would drop the name Tokyo of the title. 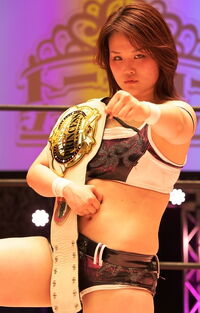 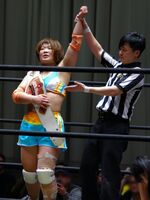 Shoko Nakajima
Add a photo to this gallery
Retrieved from "https://puroresusystem.fandom.com/wiki/Princess_of_Princess_Championship?oldid=50478"
Community content is available under CC-BY-SA unless otherwise noted.