Start a Wiki
RATEL'S is a professional wrestling stable in the Japanese promotion Pro Wrestling NOAH. It was formed on February 21, 2017 by Daisuke Harada, HAYATA, Tadasuke and YO-HEY. It was formed after the disbanding of Momo no Seishun Tag and the conclusion of the NOAH storyline with Suzuki-gun. YO-HEY would leave the stable on December 16, 2018, after turning on Harada, followed by HAYATA, who rejoined RATEL'S days later, while YO-HEY returned to RATEL'S in May 2019.

HAYATA and Tadasuke were the first members to bring an accomplishment to the stable winning the Dove Pro Wrestling's One Night Tag Team Tournament and later HAYATA would win the GHC Junior Heavyweight Championship.

On March 12, Harada and Tadasuke unsuccessfully challenged Hi69 and Taiji Ishimori to the GHC Junior Heavyweight Tag Team Championships.[5] On March 25 RATEL'S faced XX and Hitoshi Kumano and Hajime Ohara in a two out of three falls eight-man tag team match. During the match, HAYATA pinned the GHC Junior Heavyweight Champion Ohara to get the first fall. Ratel's ended up winning the match with Harada hitting Hi69 with the Katayama German Suplex to get the win. After the match in a backstage interview, HAYATA challenged Ohara into a title match. This led on May 27 HAYATA defeating Ohara to become the new GHC Junior Heavyweight Champion. After the match he would be challenged by Taiji Ishimori into a title match at the Great Voyage in Fukushima. On June 25 at the Great Voyage in Fukushima, HAYATA would lose the title to Ishimori. In July RATEL'S took part of the Global Junior Heavyweight Tag League, they would be splitted in two teams with Harada teaming with Tadasuke and HAYATA teaming with YO-HEY. Harada and Tadasuke would finish the tournament with four wins and three losses and HAYATA and YO-HEY with five wins and two losses advancing to the finals. In the finals they defeated Ishimori and Hi69 to win the tournament. On August 26 HAYATA and YO-HEY defeated Ishimori and Hi69 to win the GHC Junior Heavyweight Tag Team Championship. On September 3, Noah officially announced that HAYATA, YO-HEY and Tadasuke had signed an exclusive contract with the promotion, ending their days as a freelancer. On October 1 Harada defeated Ishimori to win the GHC Junior Heavyweight Championship.

On January 27, 2018 HAYATA and YO-HEY lost the titles to Ishimori and Hi69. RATEL'S would produce their own event on June 30 at Shinkiba 1stRING in Tokyo. From July 7 to July 31, RATEL'S were divided in two teams to take part of the Global Junior Heavyweight Tag League, with Harada teaming with Tadasuke and HAYATA teaming with YO-HEY. Harada and Tadasuke were victorious in the head-to-head match between the teams. HAYATA and YO-HEY advanced to the finals of the tournament with a record of four wins and two losses, while Harada and Tadasuke finished close behind with three wins and three losses. On August 5, HAYATA and YO-HEY defeated Hitoshi Kumano and Hajime Ohara in the finals to win the tournament for a second consecutive year. On October 30 Harada lost the title to Kotaro Suzuki, but regained on December 16 at Great Voyage in Yokohama vol.2, with the stipulation that if Harada had lost the match, RATEL'S would have had to disband. Afterwards, YO-HEY turned on Harada and sided with Suzuki and Yoshinari Ogawa.

On January 4, 2020 at New Sunrise, HAYATA lost the GHC Junior Heavyweight Championship to Yoshinari Ogawa. Later that month, all members of RATEL'S took part in the 2020 Global Junior League, wrestling in separate round-robin blocks. HAYATA finished second in his block of four, Tadasuke and YO-HEY finished third in their block of four. Meanwhile, Harada won his block with a record of one win and two draws, advancing to the semifinals of the tournament. On January 30, Harada first defeated Hajime Ohara in the semifinals and then Dick Togo in the finals to win the 2019 Global Jr. League.

The Original Members of RATEL'S 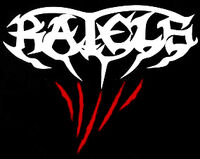 The Original Logo of RATEL'S 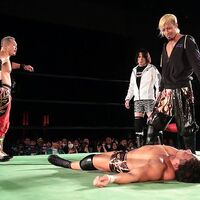 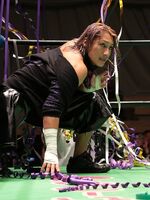 YO-HEY
Add a photo to this gallery 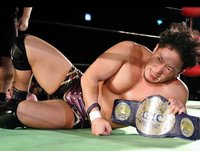 HAYATA and YO-HEY as the winners of the 2017 Global Jr. Heavyweight Tag League 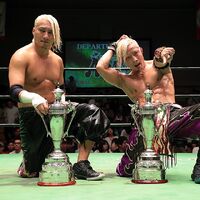 HAYATA and YO-HEY as the winners of the 2018 Global Jr. Heavyweight Tag League

HAYATA as the winner of the 2019 Global Junior League 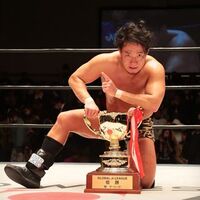 Retrieved from "https://puroresusystem.fandom.com/wiki/RATEL%27S?oldid=51403"
Community content is available under CC-BY-SA unless otherwise noted.