Real Hazard was a professional wrestling stable in the Japanese promotion Dragon Gate, formed in May 2008. The stable disbanded on March 3, 2010 when the remaining members of Real Hazard (Takuya Sugawara, Kenichiro Arai, Yasushi Kanda and Kzy) renamed the stable to Deep Drunkers.

On April 17, 2008, New Hazard's YAMATO joined Muscle Outlaw'z after attacking his tag partner Naoki Tanizaki (who had recently returned but didn't re-align with Muscle Outlaw'z) in a match against Gamma and Genki Horiguchi. On May 5, after weeks of dissension, Naruki Doi and Masato Yoshino split from the Outlaw'z, turning face after costing Yasushi Kanda his hair in a Mascara contra Cabellera (Mask vs. Hair) Cage Survival Six-Way Match. Nine days later, Shingo Takagi and Cyber Kong turned on BxB Hulk, ending New Hazard, and they proceeded to join with the remaining heel members of Muscle Outlaw'z and form Real Hazard.

On July 27 Horiguchi defeated m.c.KZ to win the Open the Brave Gate Championship. In the main event Takagi defeated BxB Hulk for the Open the Dream Gate Championship. After the match, Takagi apologized to Hulk and retracted his statement about him being weak. Soon after, Kong attempted to attack CIMA, who was at the announce table, but Takagi stopped him. After a brief argument, Real Hazard attacked Takagi and kicked him out of the group for showing compassion towards Hulk and CIMA, but he was saved by Typhoon.

On August 9 to August 28 YAMATO and Kong and Gamma and Kanda participated at the Summer Adventure Tag League and Gamma and Kanda finished the tournament with 6 points and YAMATO and Kong finished the tournament with 14 points and they get into the semifinals but lost to Shingo Takagi and Dragon Kid. On August 31 Katsuo joined the stable as Cyber Kongcito a miniature version of Cyber Kong. On September 28 Gamma, YAMATO and Kanda lost the Open the Triangle Gate Champions to Don Fujii, Magnitude Kishiwada and Masaaki Mochizuki. Shortly after losing the Triangle Gate titles, Gamma began to have problems with Kanda. These problems escalated when Kanda began to misfire on protein powder attacks during their tag matches, blinding him instead of their opponents and costing them the matches.

He even chastized Kanda to the point that Kanda told him that he would rather team with Kongcito than him. Eventually, a match was made - at the request of YAMATO - between Gamma and Kanda for January 18, 2009, where the loser would be kicked out of Real Hazard. On October 5 Cyber Kong and YAMATO defeated Naruki Doi and Masato Yoshino to win the Open the Twin Gate Champions. Gamma and Cyber Kong participated at the King of Gate 2008 but none of them pass the first round of tournament. On October 10 Tokyo Gurentai left the stable. On October 12 Horiguchi lost the Brave Gate Championship to Masato Yoshino. On December 21, Kong was against Naoki Tanizaki in a Mask vs. Hair match, which he initially lost after his stablemate Cyber Kongcito's attempt to interfere on his behalf backfired. Real Hazard would come out to protest the result, but he said he would own up to the mask stipulation - except that it would be Kongcito's mask, not his. Kongcito was unmasked, beaten up, and kicked out of the group. He then demanded a restart, due to Kongcito's intrusion, and CIMA came out, appointed the special referee, and agreed to let the match restart, since both Real Hazard and WORLD-1 (Tanizaki's stable) had intruded in the match. Kong won, and Tanizaki lost his hair. Later in that month there have starten problems between Kanda and Gamma. On December 14 in a Unit Split Survival Three-Way Six-Man Tag Match against World-1 and Typhoon and Typhoon was disbanded. Later Horiguchi proposed to Gamma and Kanda to resolved their problems in a Loser Leaves Real Hazard match.

On January 18 Gamma defeated Kanda, Keni'chiro Arai came out, seemingly to assist Kanda from a beatdown by him and the rest of Real Hazard. However, Arai attacked him, and then Gamma, Kanda, and the other group members beat Gamma down and booted him out of their ranks. On January 25 Kategora joined the stable. On February 15 Ryo Saito turned heel and turned on Susumu Yokosuka during an attempt on the Open the Twin Gate titles held by YAMATO and Kong and Saito joined the stable. On March 1 Kong and Yamato lost the Open the Twin Gate Champions to WARRIORS-5 (Gamma and Susumu Yokosuka) due to stablemate Kagetora interfered and turned on them and joined the newly founded WARRIORS-5.

On May 5 Saito and Horiguchi defeated WARRIORS-5 (Gamma and Susumu Yokosuka) to regain the Open the Twin Gate champions. On June 26 YAMATO defected from Real Hazard and Saito assumed the leadership role in the stable. Also in tht night mc.KZ joined the stable helping Saito and Horiguchi to retain their Open the Twin Gate Titles against CIMA and Gamma under the Dr. Muscle disguise and unmasking after the match. The next night, he changed his name to Kzy (pronounced "kay-zee") and debuted a completely new look. On September 17 Saito and Horiguchi lost the titles to Kamikaze (Shingo Takagi and Yamato).

In November, Susumu Yokosuka began to mysteriously associate himself with Real Hazard member Dr. Muscle. The first incident with him came on the 11th: Gamma cost Yokosuka a match against Ryo Saito when he tried to throw protein powder into Saito's eyes and it hit Susumu instead, allowing him to be pinned. After the match, Yokosuka left with Dr. Muscle. On the 14th, Dr. Muscle drew Yokosuka's attention away from a tag match that he and Gamma were in against Naruki Doi and BxB Hulk, causing them to lose. After the match, Yokosuka attacked Hulk with a Jumbo no Kachi! and then left with Dr. Muscle again. Following this, Dr. Muscle began to exhibit moves from Yokosuka's moveset, which continued over the course of the next couple of weeks. On the 23rd, Yokosuka blew off CIMA and Gamma after winning a match, and later on that night, Gamma tried to unmask Dr. Muscle, but the Doctor escaped.

Finally, on December 3, Yokosuka's true colors became known: After he no-showed for a tag team match he had with KAGETORA against Ryo Saito and Genki Horiguchi, causing KAGETORA to lose, Dr. Muscle came out and struck down KAGETORA with a Mugen and Jumbo no Kachi!, then unmasked to reveal himself to be Yokosuka. He joined Saito and Horiguchi in beating down KAGETORA some more before CIMA and Gamma stopped him, and he officially joined Real Hazard and reformed his team with Saito. On December 6, Yokosuka faced BxB Hulk for his Open the Freedom Gate title, but lost the title match.

In mid-December Saito was injured for several months and an unknown new member of Real Hazard was then scheduled to take Saito's place in all of his matches for the remainder of the tour, and five days later, it was revealed to be K-ness. He and Yokosuka reformed their "K-neSuka" team straight away. On December 27 Takuya Sugawara joined the stable. On January 10, 2010, Horiguchi put out a blog where he stated that Real Hazard would win more matches via teamwork instead of illegal tactics and weapons play in 2010. During a tag match he had with Horiguchi that day, he tried to utilize a blue box to gain an advantage, but Horiguchi prevented him from doing so. Though they still won, Horiguchi's actions caused them to begin bickering. The bickering intensified the following day, when he made Horiguchi lose a tag team match by accidentally hitting him. Eventually, Real Hazard became divided over the "clean fighting" issue. Genki would be joined by Yokosuka and K-ness in his quest for clean fights, while Kanda was supported by Kzy and Takuya Sugawara in the pursuit of continuous use of illegal tactics to win matches. On January 15 since Kagetora had no match scheduled for that day. He didn't show up, but the day after, he revealed himself to be the one under the Dr. Muscle mask, and re-joined Real Hazard. On January 19, 2010, Sugawara won the company's Battle of Tokyo Tournament. Kagetora then on February 7, oddly went to Akira Tozawa for advice, asking him if he made the right decision in rejoining Real Hazard, or if he should have stayed in the WARRIORS-5 stable. Tozawa simply replied that it was his path, so he had to find his own answer. Things got worse for KAGETORA three days later, when he accidentally cost Sugawara a shot at becoming the next challenger for the Open the Dream Gate Title. This set up a match for the following day between himself and stablemate Kzy (the former m.c.KZ), where the loser would be kicked out of Real Hazard. He also sought advice from Tozawa again, wondering if his upcoming trip to Germany would go wrong just like how leaving WARRIORS-5 and joining Real Hazard went wrong, but they both couldn't come up with an answer.

Also on February 10, Horiguchi, Yokosuka & K-ness left Real Hazard. The next day, Kzy defeated him, expelling him from Real Hazard. Yasushi Kanda and Keni'chiro Arai started to attack him afterward. On February 27, 2010, Genki Horiguchi joined up with the WARRIORS stable after leaving Real Hazard two weeks earlier, and as a condition of him joining, Saito was brought out of Real Hazard and into WARRIORS. In early March 2010 the remaining members of Real Hazard (Takuya Sugawara, Kenichiro Arai, Yasushi Kanda, Kzy) renamed the stable to Deep Drunkers.

The original members of Real Hazard 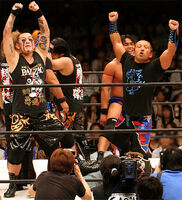 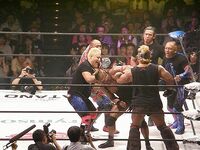 Real Hazard attacking Shingo Takagi, kicking him out of the unit 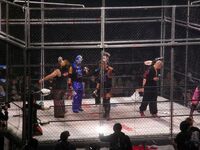 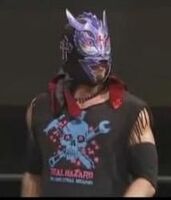 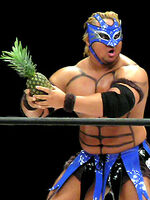 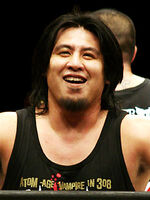 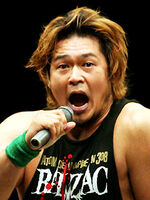 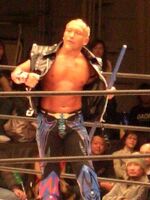 Cyber Kongcito
Add a photo to this gallery 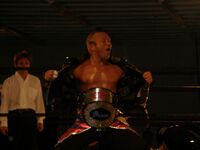 Genki Horiguchi as the Open The Brave Gate Champion 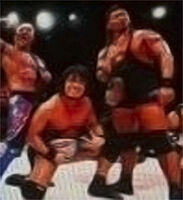 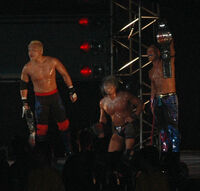 Cyber Kong and YAMATO as Open The Twin Gate Champions

Retrieved from "https://puroresusystem.fandom.com/wiki/Real_Hazard?oldid=32520"
Community content is available under CC-BY-SA unless otherwise noted.