SUMØWZ was a professional wrestling stable in the Japanese promotion Dragon Gate, formed on October 8, 2015 by Jimmyz, Don Fujii and Punch Tominaga who later became SUMO Hagetora to replace Jimmy Kagetora and Fujii who become SUMO Fujii. The last that SUMØWZ where seen was on March 5, 2016 when Fujii, Saito and Horiguchi unsucessfully challenged Monster Express (Masato Yoshino, Akira Tozawa and T-Hawk) for the Open The Triangle Gate Championship.

On October 8, 2015 after Punch Tominaga left VerserK and formed a new unit with CIMA, Gamma, Eita, El Lindaman, and rookies Takehiro Yamamura and Kaito Ishida and since Don Fujii had other plans and didn't joined CIMA, Gamma, Tominaga, Eita, Lindaman, Yamamura and Ishida, the Jimmyz annnounced that they wouldn’t be the Jimmyz. They would be the Sumoz. All Jimmyz change Jimmy to Sumo styled names and it was announced that they were going to face VerserK on Noveber 11. Saito asked the new unit if he could borrow Tominaga for one night. Since Jimmy Kagetora was injured Tominaga would be called Sumo Hagetora.

On November 1 CIMA, Gamma, and Don Fujii defended the Open The Triangle Gate Championship against the Jimmyz (Jimmy Susumu, Jimmy K-ness J.K.S. and Ryo "Jimmy" Saito) with CIMA and Gamma focused on Over Generation and Fujii focused on SUMØWZ vacated the titles afterwards. On November 11 SUMØWZ defeated VerserK in a All-Out War with Hagetora getting the first win and Horiguchi, Kanda, and Fujii got the second win. On December 19 Sumoz had their own produce show. On February 14, 2016, Susumu would defeat Shingo Takagi to win his second Open The Dream Gate Championship, ending his ten-year drought of holding a singles championship with the promotion. On March 5 Fujii, Saito and Horiguchi unsucessfully challenged Monster Express (Masato Yoshino, Akira Tozawa and T-Hawk) for the Open The Triangle Gate Championship. After this night SUMØWZ split up.

The SUMØWZ at the beginning 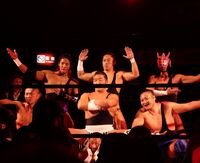 The members of SUMØWZ
Add a photo to this gallery 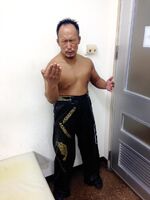 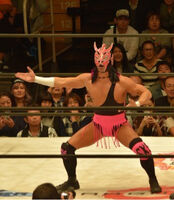 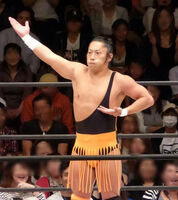 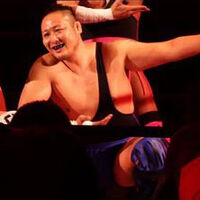 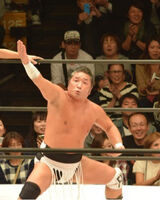 SUMO Fujii
Add a photo to this gallery 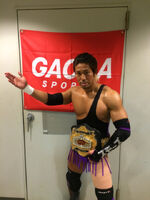 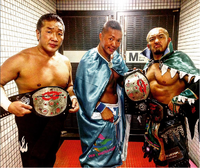 Retrieved from "https://puroresusystem.fandom.com/wiki/SUMØWZ?oldid=16397"
Community content is available under CC-BY-SA unless otherwise noted.