Sugiura-gun (杉浦軍, Sugiuragun, literally translated to "Sugiura Army") is a professional wrestling stable in Pro Wrestling NOAH (NOAH). The group was formed by Kazma Sakamoto, Nosawa Rongai, and Takashi Sugiura on March 10, 2019, after the disbanding of Hooligans, with Sugiura being appointed the leader of the stable. Shortly after their formation, Sugiura-gun has since added several new members, most notably Hajime Ohara, Hideki Suzuki, and Kazushi Sakuraba. In the short time of their formation, Sugiura-gun founding members Kazma Sakamoto and Takashi Sugiura quickly brought the GHC Tag Team Championship to the stable.

Other accomplishments attained by the stable include Sakamoto and Sugiura winning the 2019 Global Tag League. As the leader of Sugiura-gun, Takashi Sugiura brought the GHC National Championship to the stable, while also reclaiming his spot of being one of Noah's top wrestlers and has challenged for the GHC Heavyweight Championship, as well reaching the finals of the 2019 N-1 Victory. Through Noah's working relationship with the American Major League Wrestling (MLW) promotion, El Hijo de Dr. Wagner Jr. as joined the stable as a part-time member of the group. In November 2019, Sugiura-gun began feuding with villainous stable KONGOH. During their feud, Sugiura-gun was joined by Kazuyuki Fujita and produced their own event at the Korakuen Hall in December. In the following year, the stable added several new members, most notably Dick Togo and Rene Dupree, who alongside El Hijo de Dr. Wagner Jr. won the 2020 Global Tag League and regained the GHC Tag Team Championship to the stable. In May, the stable had a major clean up of the stable, with the departure of Dick Togo, Hajime Ohara, Hideki Sekine, Kazma Sakamoto, and Seiki Yoshioka, who were replaced with Kaz Hayashi and Kendo Kashin.

On February 24, 2019, Hooligans were forced to disband after losing to Takashi Sugiura, Akitoshi Saito, Masao Inoue, Yoshiki Inamura, and Kinya Okada in an elimination match. After the match, Kazma Sakamoto challenged Sugiura to a match, which he accepted. On March 10 at Great Voyage in Yokohama, Sugiura defeated Sakamoto. Following the match, in a backstage interview, Sakamoto and accompanied Sugiura, and they were joined by Nosawa Rongai, with Sakamoto wanting a new start with Sugiura. Sugiura initially didn't trust them, but over the course of time, Sakamoto and Rongai got the trust of Sugiura, with Sugiura being impressed with Sakamoto. Sakamoto's efforts managed to impress Sugiura, leading them to team up for the upcoming Global Tag League. In April, Sakamoto and Sugiura took part in the 2019 Global Tag League. During the tournament, on April 17, Rongai announced the stable would be named "Sugiura-gun", while also introducing Hideki Suzuki as the newest member of the stable. Also in the tournament, Sugiura defeated reigning GHC Heavyweight Champion Kaito Kiyomiya. Sakamoto and Sugiura finished the tournament with a record of five wins and two losses, advancing to the finals of the tournament. On May 2, Sugiura faced Hajime Ohara in a match, which Sugiura won. After the match, Ohara asked Sugiura to join the stable, which he accepted, becoming the fifth member of Sugiura-gun. Two days later, Sakamoto and Sugiura defeated reigning GHC Tag Team Champions AXIZ (Go Shiozaki and Katsuhiko Nakajima) in the finals to win the tournament. After the match, Sugiura challenged AXIZ to a rematch for their titles and also challenged Kaito Kiyomiya for GHC Heavyweight Championship.

From August 18 until September 10, Sugiura took part in the 2019 N-1 Victory, where he won his block with a clean record of four wins, advancing to the finals of the tournament. During the tournament, Sugiura began feuding with Kenoh and his KONGOH stable, with Kenoh later accusing Sugiura to be a "company dog", which also escalated to a Twitter feud, leading Sugiura to make a t-shirt of a dog to mock him. On September 16, Sugiura was defeated in the finals by Kenoh. On October 3, it was announced that Sugiura-gun would promote their own event on December 27 at Korakuen Hall. During the event, Kazuyuki Fujita was introduced as the newest member of the stable. On November 2 at Noah the Best, Sugiura defeated Michael Elgin to become the inaugural GHC National Champion. Later that month, Sugiura began feuding with KONGOH's member Masa Kitamiya, after Kitamiya challenged Sugiura to a match for the GHC National Championship. On December 3, Fujita, Suzuki, and Sugiura defeated KONGOH. Afterwards, Sugiura mocked them, calling them "weak". On December 27, Sugiura-gun produced its own event at Korakuen Hall. During the event, KONGOH attacked Suzuki, Sakura, Fujita, and Suzuki during their match in the main event. Afterwards, Sugiura challenged KONGOH to a match, leading Fujita, Suzuki, and Sugiura to defeat KONGOH for the second time.

On January 4, 2020, at New Sunrise, Suzuki and Kinya Okada faced KONGOH's duo of Kenoh and Yoshiki Inamura in a losing effort. Afterwards, Suzuki attacked Kenoh. Later that night, Sugiura defeated Masa Kitamiya to make his second successful of the GHC National Championship. The following day at Reboot, Okada and Ohara faced KONGOH's duo of Haoh and Nioh in a losing effort. Afterwards, two masked wrestlers attacked Haoh and Nioh, revealing themselves to be Rongai and Sugiura-gun newest member Dick Togo. Later that month, three members of Sugiura-gun took part in the 2020 Global Junior League, with Rongai, Ohara, and Togo wrestling in separate round-robin blocks. Rongai finished third in his block, with a record of one win and two draws. Meanwhile, Ohara and Togo won their respective blocks with a record of two wins and one loss, advancing to the semifinals of the tournament. On January 30, Ohara was defeated by Daisuke Harada in the semifinals. Meanwhile, Togo made it to the finals of the 2020 Global Junior League, defeating GHC Junior Heavyweight Champion Yoshinari Ogawa in the semifinals, before losing to Daisuke Harada. Between March 22 and March 26, the stable was joined by former mixed martial artist Hideki Sekine and international wrestler Rene Dupree. The following month, Sugiura-gun took part in the 2020 Global Tag League, being split into two teams with Dupree and Wagner being placed on block A and Sugiura and Sekine on block B. As part of Sugiura-gun, Dupree, and Wagner dubbed themselves as the Sugiura-gun International. Sugiura and Sekine finished second in their block, with a record of two wins and one loss. Meanwhile, Dupree and Wagner finished with the same record as Sugiura and Sekine but managed to finish first on their block, advancing to the finals of the tournament. On April 18, Seiki Yoshioka was revealed as the newest member of the stable. Later that night, Dupree and Wagner defeated AXIZ (Go Shiozaki and Katsuhiko Nakajima) in the finals to win the tournament. The following day, Dupree and Wagner defeated Masaaki Mochizuki and Naomichi Marufuji to win the GHC Tag Team Championship.

On May 3, the members of Sugiura-gun and KONGOH faced each other in various matches between them, before facing each other in a twelve-man elimination tag team match, which KONGOH won. Six days later, Rongai announced a major clean up of the stable, leading Dick Togo, Hideki Sekine, and Kazma Sakamoto to leave the stable, except for Kazuyuki Fujita due to Rongai unable to get in contact with him. Later that night, Sugiura lost the GHC National Championship to Katsuhiko Nakajima. The following day, Atsushi Kotoge asked whether he could join the stable, leading Rongai to refuse. Afterwards, Yoshioka turned on Rongai, Ohara tried to keep calm things but ended up joining them. Later that night, Rongai teased that Kendo Kashin would be joining the stable, to replace Ohara and Yoshioka, but Sugiura was having enough of Rongai, bringing wrestlers to the stable without his consent. However, on June 10, Kashin and Kaz Hayashi were revealed as the new members of the stable, facing Full Throttle (Atsushi Kotoge, Hajime Ohara, and Seiki Yoshioka) in a winning effort. On August 10, Wagner and Dupree returned the GHC Tag Team Championships to Noah, due to being unable to attend Noah's events in relation to travel restrictions because of the COVID-19 pandemic, vacating the titles in the process. Sugiura and Sakuraba quickly regained the titles for Sugiura-gun, defeating AXIZ (Go Shiozaki and Katsuhiko Nakajima) on August 30, to win the GHC Tag Team Championship. From September 18 and October 11, both Sakuraba and Sugiura took part in the 2020 N-1 Victory, wrestling in separate round-robin blocks. Both failed to advance to the finals of the tournament with Sakuraba finishing tied sixth in his block of sixth and Sugiura finishing second in his block. On November 8, Noah announced the match card for Sugiura's 20th anniversary as professional wrestler the "All Dogs Gather 2" on December 29 at the Korakuen Hall. MMA fighter Daisuke Nakamura was also announced as Sugiura-gun newest member, while a mystery member would be joining the stable. On December 27, Nosawa revealed the newest member of the stable, which turned out to be Kazunari Murakami. The following day, Hayashi announced his departure from NOAH, leaving the stable. On January 4, 2021 at New Sunrise, Nosawa Rongai's mysterious partner would be revealed as Ikuto Hidaka after being unmasked by Yuya Susumu, HAYATA and Yoshinari Ogawa. 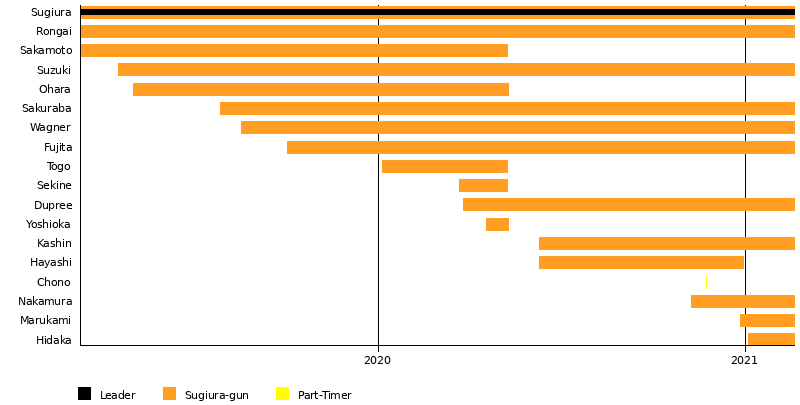 Retrieved from "https://puroresusystem.fandom.com/wiki/Sugiura-gun?oldid=58707"
Community content is available under CC-BY-SA unless otherwise noted.