In the following years, wrestlers representing Lucha Libre AAA World Wide (AAA) and Extreme Championship Wrestling (ECW) would also participate in the tournament. After 1995, the tournament took a five-year hiatus before returning in 2000 (this time hosted by Michinoku Pro Wrestling).

Since that time, the tournament has only taken place three times (in 2004, 2009, and 2016). The original Super J-Cup, held in 1994, is widely regarded as one of the greatest professional wrestling shows of all time. Dave Meltzer, editor of the Wrestling Observer Newsletter, called the 1994 Super J-Cup "the most incredible single night of wrestling ever".[1]

The inaugural Super J-Cup tournament was hosted by New Japan Pro-Wrestling. The event took place on April 16, 1994, at Sumo Hall in Tokyo, Japan.[2]

The second Super J-Cup was hosted by Wrestle Association R taking place on December 13, 1995, at Sumo Hall in Tokyo, Japan.[3]

The third Super J-Cup tournament was a two-night event hosted by Michinoku Pro Wrestling. The first round was held on April 1, 2000 at Sendai City Gymnasium in Sendai, Japan and the final three rounds were held on April 9, 2000 at Sumo Hall in Tokyo, Japan.[4]

The fourth Super J-Cup was promoted by Osaka Pro Wrestling and was held on February 21, 2004, at Osaka-jō Hall in Osaka, Japan.[5]

The fifth Super J-Cup tournament was produced by New Japan Pro-Wrestling. It was a two-night event taking place on December 22 and December 23, 2009 at the Korakuen Hall in Tokyo, Japan.[6]

The sixth Super J-Cup tournament was promoted by New Japan Pro-Wrestling. It was a two-night event taking place on July 20, 2016 and August 21, 2016. The first round held on July 20 took place at the Korakuen Hall in Tokyo, Japan, while the next three rounds took place on August 21 at the Ariake Coliseum in Tokyo, Japan.[7]

The seventh Super J-Cup tournament was promoted by New Japan Pro-Wrestling. It was a three-night event taking place on August 22, 2019, August 24, 2019, and August 25, 2019, and its the first time it was held in the United States. The first round was held on August 22 will take place at the Temple Theater in Tacoma, Washington, while the next three rounds took place on August 24 at the San Francisco State University Student Life Event Center in San Franciso, California, while the finals were held on August 25 at the Walter Pyramid in Long Beach, California.[7] 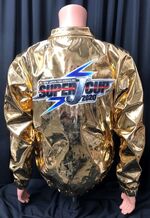 Retrieved from "https://puroresusystem.fandom.com/wiki/Super_J-Cup?oldid=48855"
Community content is available under CC-BY-SA unless otherwise noted.