Start a Wiki
Toryumon Generation, commonly abbreviated as Toryumon (闘龍門, Tōryūmon) is a professional wrestling stable in the Dragon Gate (DG) promotion. The stable was founded on December 18, 2019, by Último Drágon and his students that were trained by him as part of the class of Ultimo Dragon Gym graduates.

The stable was founded after Último Drágon entered a feud with villainous stable R.E.D, leading him to be joined by his former students. Afterwards, the stable became part of a feud with Dragon Gate and R.E.D in a "Generation War". His former suspended their own stables in order to unite all wrestlers from the Toryumon generation to form the stable. During the "Generation War", the stable was joined by Toryumon's original Shuji Kondo. As part of the storyline, Naruki Doi brought the Open The Dream Gate Championship, while Dragon Kid, Ryo Saito, and Kenichiro Arai brought the Open The Triangle Gate Championship to the stable.

In July 2019, Último Drágon returned to Dragon Gate as part of the celebration of its 20th anniversary, when the promotion was founded as Toryumon Japan. Afterwards, one of his former students began asking Drágon to join the promotion full-time, leading him to accept. In September, Drágon began a feud with R.E.D, leading him to be joined by his former students Darkness Dragon, Ryo Saito, and Super Shisa. On October 8, Dragón, Saito, Shisa and Darkness Dragon defeated R.E.D. Afterwards, Dragón joined by his former students Kenichiro Arai, Yasushi Kanda (who turned on R.E.D) and later "brother" YASSHI, Genki Horiguchi, and Susumu Yokosuka continuing a series of matches between the two sides. On December 4, Dragón defeated Eita by disqualification, after Eita removed Dragón’s mask. Afterwards, R.E.D attacked Dragón until his former students Naruki Doi and Masato Yoshino made the save. The Green and Red Masked Demons were forced to a match, leading Dragón, Doi, and Yoshino to face Eita, Red, and Green Mask Demons to face in a losing effort, after Kaito Ishida revealed himself to be the Green Masked Demon, turning on MaxiMuM.

On December 26, Dragon Gate announced the participating teams in a tournament to crown the new Open The Twin Gate Champions. In the tournament, Toryumon would be represented by four teams taking part in the tournament to crown the new Open The Twin Gate Champions, Kid and Kagetora; Fujii and Kanda; Horiguchi and Saito; Yoshino and Yokosuka. All four teams failed to win the tournament, with Yoshino and Yokosuka being eliminated in the semifinals to Ben-K and YAMATO on January 15. Afterwards, Yoshino and Yokosuka were attacked by R.E.D. During the event, Saito and Dragon Gate's Strong Machine J pinned one-third of the Open The Triangle Gate Champions H.Y.O. Afterwards, Arai, Kid, and Saito challenged R.E.D to a match for the Open The Triangle Gate Championship. Also in the event, Doi was challenged by Dragon Gate's Kzy to a match for his Open The Dream Gate Championship. Later that night, Yoshino revealed Shuji Kondo to be the stable newest member, after Yoshino challenged the Dragon Gate duo of Ben-K and YAMATO and the R.E.D's duo of BxB Hulk and Eita to match. Later that month, two teams of Toryumon took part in the 2020 Ashiyanikki Cup 6 Man Tag Team Tournament, Kid, Horiguchi, and Yokosuka; and Doi, Saito, and Yoshino. In the first round, Kid, Horiguchi, and Yokosuka were eliminated from the tournament by the Dragon Gate trio of Ben-K, Dragon Dia and Strong Machine J. Meanwhile, Doi, Saito, and Yoshino were eliminated in the semifinals by the R.E.D trio of (Big R Shimizu, Eita, and Kaito Ishida).

The second big event of the storyline was on February 7 with a card full of matches between members of Toryumon, Dragon Gate, and R.E.D. On that night, Kid, Saito, and Arai won the Open The Triangle Gate Championship by defeating R.E.D (Diamante, H.Y.O, and Takashi Yoshida) and Dragon Gate (Keisuke Okuda, Strong Machine J, Yosuke♡Santa Maria) in a three-way match. Later that night, Kondo and Yoshino won their match against R.E.D members BxB Hulk and Eita, and Dragon Gate members KAI and YAMATO. Afterwards, General Manager Takayuki Yagi announced a six-way match between all wrestlers that took part in the match. However, the match ended up being canceled, because of the Coronavirus (COVID-19) pandemic. On February 29 on the first night of the Champion Gate in Osaka, Arai, Kid, and Saito lost the Open The Triangle Gate Championship to Ben-K, Dragon Dia, and Strong Machine J. From May 15 to June 7, six members of Toryumon took part in the 2020 King of Gate. During the tournament, Doi was defeated by Kaito Ishida in the quarterfinals. After winning a battle royal to return to the tournament, Doi was the only Toryumon member to reach the finals, losing to Eita in the finals on June 7, to finish as runner-up. On July 4, Kondo was revealed as the unknown member to team with Doi and Yoshino in a winning effort against R.E.D's Eita, H.Y.O, and Takashi Yoshida. 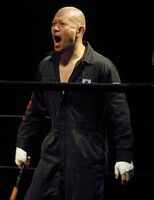 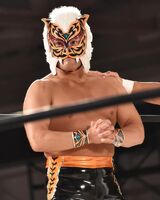 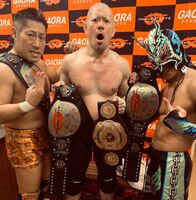 Saito, Arai and Kid as Open The Triangle Gate Champions
Add a photo to this gallery
Retrieved from "https://puroresusystem.fandom.com/wiki/Toryumon_(stable)?oldid=53727"
Community content is available under CC-BY-SA unless otherwise noted.