Tribe Vanguard (トライブ・ヴァンガード, Toraibu Vangādo) was a professional wrestling stable in the Japanese promotion Dragon Gate on May 5, 2016. On May 28 BxB Hulk, Kzy, Maria and YAMATO named the stable Tribe Vanguard. Tribe was easy to understand in the jungle and the need a tribe as to survive and pro wrestling was the same and Vanguard meant the forefront unit of Dragon Gate being reflected in their name.

On July 2, 2016 it was revealed that Flamita was the mystery member that was going to join them for the Open the Triangle Gate Championship match at the Kobe Pro Wrestling Festival. Later in 2017 U-T joined them. Tokyo Sports cited YAMATO's Open the Dream Gate Championship reign impact as one of the factors of giving YAMATO the 2017 Outstanding Performance Award. Kzy left the stable at the beginning of 2018. Shortly after Kagetora joined the stable on May 6 at Dead or Alive. At the beginning of January, KAI would join the unit. In December 2019, Hulk turned on YAMATO and defected to R.E.D. Afterwards, YAMATO suspended the stable and formed the Dragon Gate stable, entering into a feud with R.E.D and Toryumon as part of a "Generation War".

On May 5, 2016, during the Six-way steel cage match, all VerserK members betrayed YAMATO during the match when VerserK tried to prevent YAMATO from escaping but Kzy and Yosuke♥Santa Maria tried to help but he couldn't until the returning BxB Hulk helped YAMATO escape and Hulk prevent to Kotoka escape and also Jimmyz, Monster Express and Over Generation blocked him to escape and Kotoka get his hair shaved and YAMATO and formed an alliance with them and promised that they were going to destroy VerserK. On May 8 VeserK attacked YAMATO but BxB Hulk made the save, BxB Hulk, YAMATO, Maria and Kzy formed a stable. On May 28 BxB Hulk, Kzy, Maria and YAMATO named the stable Tribe Vanguard, Tribe is easy to understand in the jungle, you need a tribe to survive and pro wrestling is no different and Vanguard means the forefront and they will be the leading unit in Dragon Gate and their name reflects it. Their attire scheme is varying colors in a camo pattern, although the most common color is white. At the end of the King of Gate Kzy finished block A with 5 points and Maria finished block B with 4 points and YAMATO finished his block with 6 points and he advanced to the semifinals. At the semifinals YAMATO defeated Akira Tozawa to advanced to the semifinals and at the finals YAMATO defeated Big R Shimizu to win the tournament after the win YAMATO challenged Shingo Takagi for the Open the Dream Gate Championship and the General Manager Yagi announced that the match was going to be on the 2016 Kobe World Pro Wrestling Festival.[1] On June 26 Eita challenged Maria for the Open the Brave Gate Champion and later that night Hulk and Kzy challenged Monster Express (Masato Yoshino, Akira Tozawa and T-Hawk) for the Open the Triangle Gate Championship Yoshino also accepted their challenged and announced that they were going to defend the titles in a Nine-Man Three Way Six Man Tag Team match the match was also including CIMA, Dragon Kid and Peter Kaasa and Hulk and Kzy also announced that on July 2 they were going to reveal the new member of the stable.

On November 28 Hulk and Kzy defeated Gamma, Dragon Kid and Mondai Ryu to make U-T joined them. On December 23 at Final Gate YAMATO, BxB Hulk and Kzy lost the titles to Naruki Doi, Masato Yoshino, and Jason Lee. On February 7, 2018, after unsuccessfully challenging Masaaki Mochizuki for the Open The Dream Gate Championship, Kzy left Tribe Vanguard. On May 6 at Dead or Alive, Kagetora helped YAMATO escaping the Seven-way steel cage match, joining Tribe Vanguard. Following the Dead or Alive, four members of Tribe Vanguard took part in the King of Gate with YAMATO, Hulk, Maria and Kagetora wrestling in separate round-robin blocks. Hulk and Maria finished the tournament with a record of two wins and two losses, Maria entered his last round-robin matches with a chance to advance to the semifinals, but was eliminated after losing to Naruki Doi. Meanwhile, Kagetora finished almost last in his block with a record of one win, one loss, one draw, and one double coun- out, while YAMATO won his block with a record of three wins and one loss, advancing to the semifinals of the tournament. On June 1, YAMATO defeated Naruki Doi to advance to the finals of the tournament. YAMATO was defeated by Masato Yoshino on June 9 in the finals of the tournament. The following day, Kagetora and Maria unsuccessfully challenged Big Ben (Big R Shimizu and Ben-K) to win the Open the Twin Gate Championship. Shortly after, Hulk and YAMATO challenged Shimizu and Ben-K to a title match, leading the two defeating Ben-K and Shimizu on July 22 at Kobe Pro Wrestling Festival. On December 19, YAMATO and Hulk were forced to vacant the Open The Twin Gate Championship due to Hulk suffering a neck injury. On December 23 at Final Gate, YAMATO and Kagetora failed to regain the Open The Twin Gate Championship in a four-way elimination tag team match involving Naruki Doi and Masato Yoshino, Bandido and Flamita, and Ben-K and Big R Shimizu.

Since January 2019, Tribe Vanguard suffered three casualties with Hulk and Maria, being injured and Flamita in Mexico, YAMATO had to ask KAI to join Tribe Vanguard, which he accepted. On February 5, tensions would come ahead between Tribe Vanguard and all the stables in Dragon Gate, with every stable except MaxiMuM agreeing to a match on March 7. At the event on March 7, Tribe Vanguard won the four-way eight-man tag team elimination match, due to an error by R.E.D. General Manager Takayuki Yagi capitalized on the opportunity and announced the rules for the Steel Cage Survival match, as well as multiple tag team matches between members of the respective units to decide, which member would enter in the match. Leading to the event, YAMATO joked that he would kick out Maria, leading him to return from his injury. YAMATO and U-T defeated Kagetora and KAI, with YAMATO pinning Kagetora to represent Tribe Vanguard in the match. On April 28, YAMATO and KAI defeated Ben-K and Shimizu to win the Open the Twin Gate Championship, after Eita cost Ben-K and Shimizu the match. On May 6 at Dead or Alive, Hulk returned from his injury as Darkside Hulk helping YAMATO to escape the "Bonds" steel cage survival five-way match. After the match, YAMATO decided that no one would be no one kicked out of the stable. He also announced would return that Flamita would be returning to Dragon Gate in June. Later that month, five members took part in the 2019 King of Gate, with YAMATO and Kagetora wrestled in the C block. KAI was the only one, who advanced to the semifinals, after winning his block with a record of three wins, one loss and, one draw. On June 6, KAI was defeated by Eita in the semifinals of the tournament.

In June 2019, Flamita made his return to the promotion. At the end of the month, Flamita and Yokosuka faced each other in multiple tag team matches, with Flamita pinning Yokosuka each time. On June 29, after being beaten by Flamita for the third time, Yokosuka challenged him to a match for his Open The Brave Gate Championship with General Manager Takayuki Yagi announcing the title match for the event. Meanwhile, on June 9, YAMATO and KAI defended the Open The Twin Gate Championship against Doi and Ishida. The match would end in a no-contest after Eita and Big R Shimizu interfered in the match, while also claiming to be the next challengers. Tribe Vanguard and MaxiMuM weren't satisfied with the conclusion of the match and all teams wanted to face each other in a rematch, leading General Manager Takayuki Yagi making the match official of the event. On July 13, it was announced that Hulk would make his in-ring return at Kobe Pro-Wrestling Festival. At the event on July 21, Hulk made his return from injury teaming with Kagetora and Maria in a losing effort against Mochizuki Dojo (Hyou Watanabe, Yuki Yoshioka, and Kota Minoura) in a three-way match also involving Natural Vibes (Genki Horiguchi, "brother" YASSHI and Punch Tominaga). Later that night, KAI and YAMATO lost the Open The Twin Gate Championship in a three-way match also involving Naruki Doi and Kaito Ishida. During this month, Kagetora and Maria took part in the AJPW's 2019 Jr. Tag Battle of Glory, finishing the tournament with a record of three wins, one loss, and one draw, advancing to the finals of the tournament. On July 28, Kagetora and Maria were defeated by Hikaru Sato and Yusuke Okada in the finals of the tournament. On December 15 at Final Gate, YAMATO and Hulk defeated Eita and Big R Shimizu to regain the Open The Twin Gate Championship. Three days later, Hulk turned on YAMATO to join R.E.D, revealing himself to be the Red Masked Demon. He would blame YAMATO for inviting KAI to the stable, while he was injured when also had a neck injury. Afterwards, YAMATO suspended the stable and formed the Dragon Gate stable in order to unite all Dragon Gate generation of wrestlers against Toryumon and R.E.D in a "Generation War". Meanwhile, Kagetora became part of the Toryumon due to Último Drágon being his mentor. 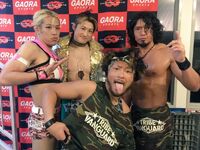 The original members of Tribe Vanguard. 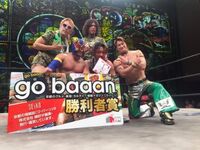 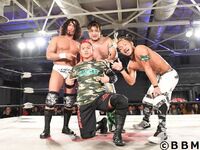 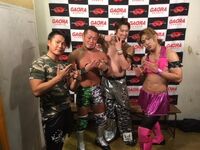 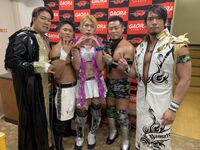 YAMAKAItwin.jpg|YAMATO and KAI as Open The Twin Gate Champions

YAMATO as the winner of the 2016 King of Gate 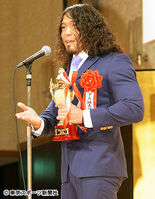 Retrieved from "https://puroresusystem.fandom.com/wiki/Tribe_Vanguard?oldid=50009"
Community content is available under CC-BY-SA unless otherwise noted.