The title was established on October 23, 2013 after it was announced that the Get The Glory Tournament winner Shuji Ishikawa would face Ivan Markov to crown the inaugural champion. On December 11, 2013 Markov defeated Ishikawa to become the first champion. The title was before part of DDT's sub-brand Union Pro Wrestling (Union Pro).

After Union closed in October 2015, the title was sealed along. After one year on December 2016 the title was revived to be the main championship of Pro Wrestling BASARA. On December 25, 2016 Isami Kodaka defeated Trans-Am★Hiroshi to resurrect the title. 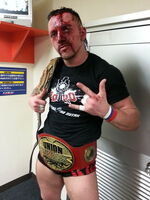 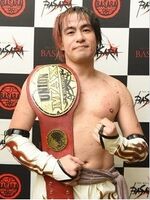 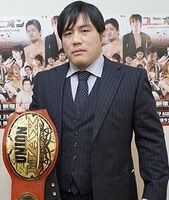 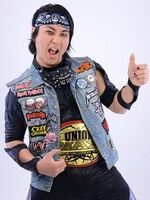 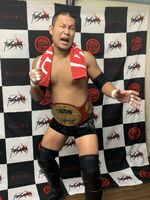 Fuminori Abe
Add a photo to this gallery
Retrieved from "https://puroresusystem.fandom.com/wiki/Union_MAX_Championship?oldid=52150"
Community content is available under CC-BY-SA unless otherwise noted.