The WDW Championship is the top singles championship in the Doutonbori Pro Wrestling promotion. The title was announced on August 2014, in conjunction with the start of a tournament to crown the first WDW Tag Team Championship. On August 10, 2014 Kuuga won the 2014 Doutonbori Saikyou Otoko Tournament to be crowned as the inaugural champion. WDW means Wrestling Doutonbori World.

The 2014 Doutonbori Saikyou Otoko Tournament was held from July 6 to August 10, 2014. The tournament was served to crown the inaugural WDW Champion. The winner Kuuga defeated Billyken Kid to become he inaugural champion. 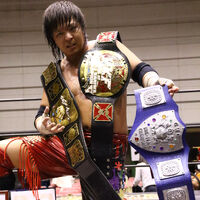 TORU
Add a photo to this gallery
Retrieved from "https://puroresusystem.fandom.com/wiki/WDW_Championship?oldid=51921"
Community content is available under CC-BY-SA unless otherwise noted.