The WDW Tag Team Championship is the top tag team championship in Doutonbori Pro Wrestling promotion. The title was announced on October 19, 2014 in conjunction with the start of a tournament to crown the first WDW Champion.

On October 19, 2014, it was announced that Dotonbori Pro Wrestling would also be introducing its own tag team championship. The first WDW Tag Team Champions would be crowned in the "Second Dotonbori Tag King Decision League" round-robin tournament taking place between July 6 and August 10, 2014. The two blocks containing the eight participating teams. In the tournament, a win was worth two points, a draw one point and a loss zero points. The top two teams from each block advanced to the finals and the winners wrestled in the tournament final to determine the inaugural champions. On August 10, Billyken Kid and Masamune defeated the Super Sonic (Daisuke Masaoka and Rapid) in the finals to win the tournament and become the inaugural WDW Tag Team Champions. 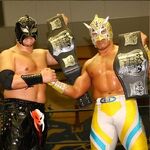 Rapid and Orochi
Retrieved from "https://puroresusystem.fandom.com/wiki/WDW_Tag_Team_Championship?oldid=53585"
Community content is available under CC-BY-SA unless otherwise noted.