The World Junior Heavyweight Championship is the top singles junior heavyweight championship in the All Japan Pro Wrestling (AJPW) promotion. The title was introduced on July 31, 1986, at an AJPW show. Only wrestlers under the junior heavyweight weight-limit may hold the championship. The weight-limit for the tag team title is 100 kg (220 lb); it is assumed that this title has the same weight-limit. The title has been defended outside All Japan several times, mainly in Pro Wrestling Noah.

On July 16, 2000, the World Junior Heavyweight Championship including the rest of the AJPW Champions were vacated due to Yoshinari Ogawa and several AJPW wrestler joining Mitsuharu Misawa exodus to form Pro Wrestling NOAH. Eleven months later Kendo Kashin faced Masanobu Fuchi for the vacated championship which Kashin won. On February 12, 2004, the championship was vacated due to inactivity. Ten days later the Kaz Hayashi defeated Blue-K for the vacated championship. On January 10, 2005, at Kaientai Dojo the championship changed hands in another promotion for the first time when Taka Michinoku defeated Kaz Hayashi for the championship the title match was also for the Champion of Strongest-K. On October 18, 2007, after a title defense between Katsuhiko Nakajima and Silver King ended in a no contest, Nakajima remained the official champion.

On October 25, 2008, the championship was first defended in another promotion the AJPW rival promotion Pro Wrestling NOAH when Naomichi Marufuji fought KENTA in a double title match also for the GHC Junior Heavyweight Championship, the match ended in a time limit draw. It was also an attempt to unify the titles. Due to the match ending in a time limit draw, both champions kept their titles in the hands of their respective holder, while gaining favorable reviews for their efforts by the media with some claiming it to be a Match of the Year. 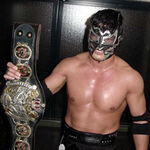 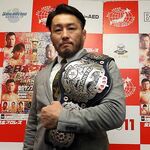 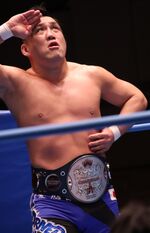 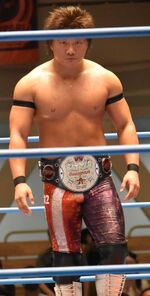