The Wrestle-1 Tag Team Championship was the top tag team championship in Wrestle-1. The title was announced on September 22, 2014, in conjunction with the start of a tournament to crown the first Wrestle-1 Champion. In Japanese the title's name includes the katakana term for "championship", Chanpionshippu (チャンピオンシップ), derived from the English language instead of the more common kanji term Ōza (王座).[1]

On September 22, 2014, during the second day of a tournament to determine the inaugural Wrestle-1 Champion, it was announced that Wrestle-1 would also be introducing its own tag team championship.[1][5][6] Through Wrestle-1's relationship with American promotion Total Nonstop Action Wrestling (TNA), the promotion had previously presented a match for the TNA World Tag Team Championship.[7][8] The first Wrestle-1 Tag Team Champions would be crowned in the "First Tag League Greatest" round-robin tournament taking place between November 15 and 30, 2014.[1] The two blocks containing the ten participating teams were revealed on November 3.[9][10][11] The teams were later given official team names on November 14.[12] In the tournament, a win was worth two points, a draw one point and a loss zero points. The top two teams from each block advanced to the semifinals and the winners wrestled in the tournament final to determine the inaugural champions.[9] On November 27, Seiki Yoshioka pulled out of the tournament with a knee injury, forcing his team to forfeit their final match in the tournament.[13][14] On November 30, Team 246 (Kaz Hayashi and Shuji Kondo) defeated the new Wild order (Akira and Manabu Soya) in the finals to win the tournament and become the inaugural Wrestle-1 Tag Team Champions.[2][15][16] 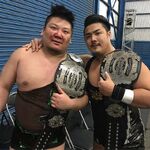 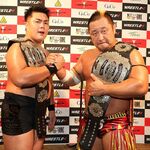 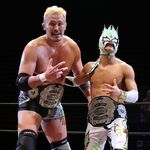 Retrieved from "https://puroresusystem.fandom.com/wiki/Wrestle-1_Tag_Team_Championship?oldid=52380"
Community content is available under CC-BY-SA unless otherwise noted.